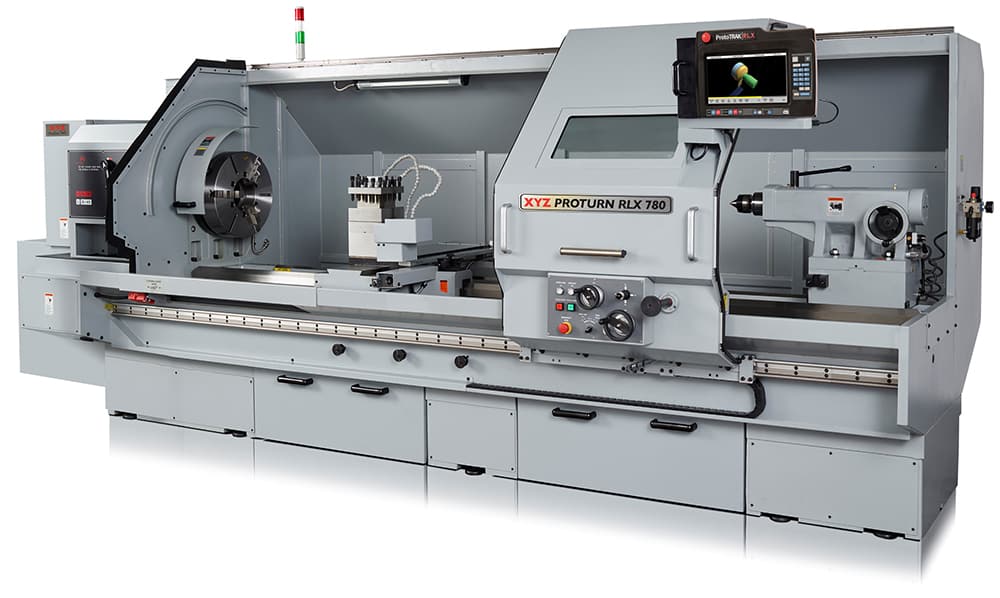 XYZ Machine Tools has extended its turning range with the addition of the ProTURN RLX 780, a 3 metre gap bed lathe with a swing of 780 mm, that has been engineered to use the latest ProtoTRAK control. Previously XYZ Machine Tools’ XL series of lathes had been restricted to the use of the Siemens 828D ShopTurn control system, but with developments in drive technology the first of these large capacity lathes can now be married with the ProtoTRAK control, opening up opportunities for existing ProtoTRAK users, who may have resisted the move to Siemens in the past.

The ProTURN RLX 780 shares all of the attributes of its sister machine the XL 780, with a between centre distance of 3 metres, 160 mm diameter spindle bore and a 43 hp (32 kW) spindle with a gearbox providing two speed ranges between 20 and 1300 revs/min. A 500 mm diameter 3-jaw chuck and four-station auto indexing turret are also standard equipment. The construction of the machine base and headstock remains as solid ribbed cast iron,, with  The major change is, of course, the ProtoTRAK control, with its 15.6 inch touchscreen control enhancing the already ease of use and programming capabilities, allowing users to go from drawing to finished component faster than ever before. Users of ProtoTRAK can generate complex programs either directly at the control using its conversational programming, where intuitive features such as ‘Look’ that allows users to verify input data in real-time while generating tool paths and ‘Verify’ that presents a graphical interpretation of the part to be machined. For those wanting to program offline there are the options to use G-code generated by CAM systems or DXF and Parasolid converter software. The combination delivers the ultimate control for producing one-off and low volume parts, typically machined on large capacity lathes.