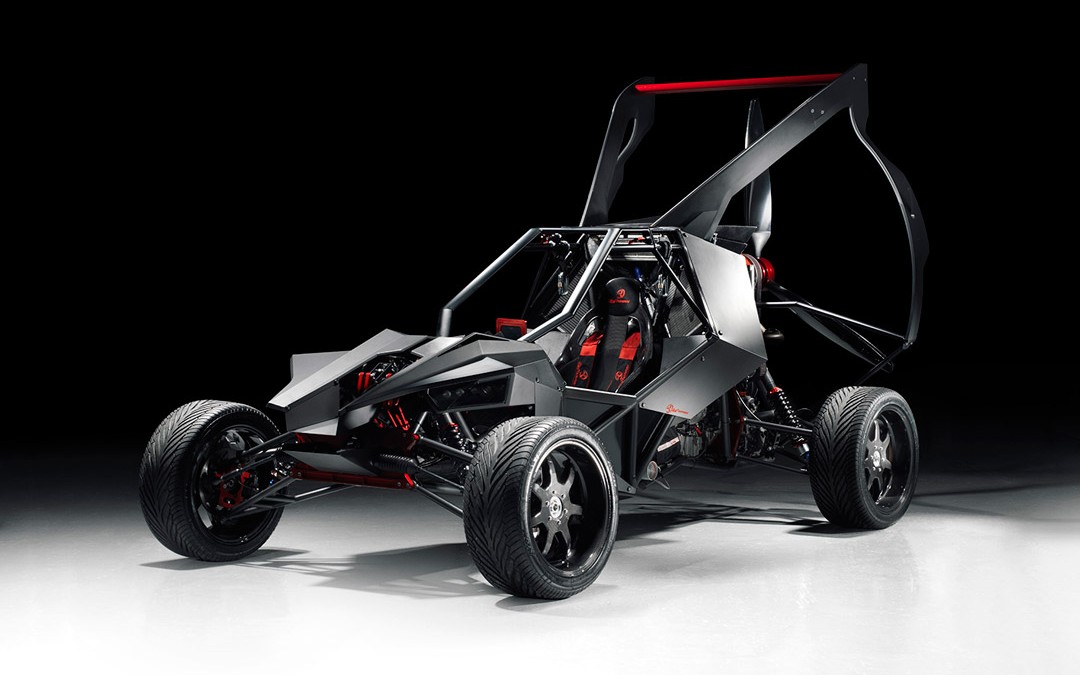 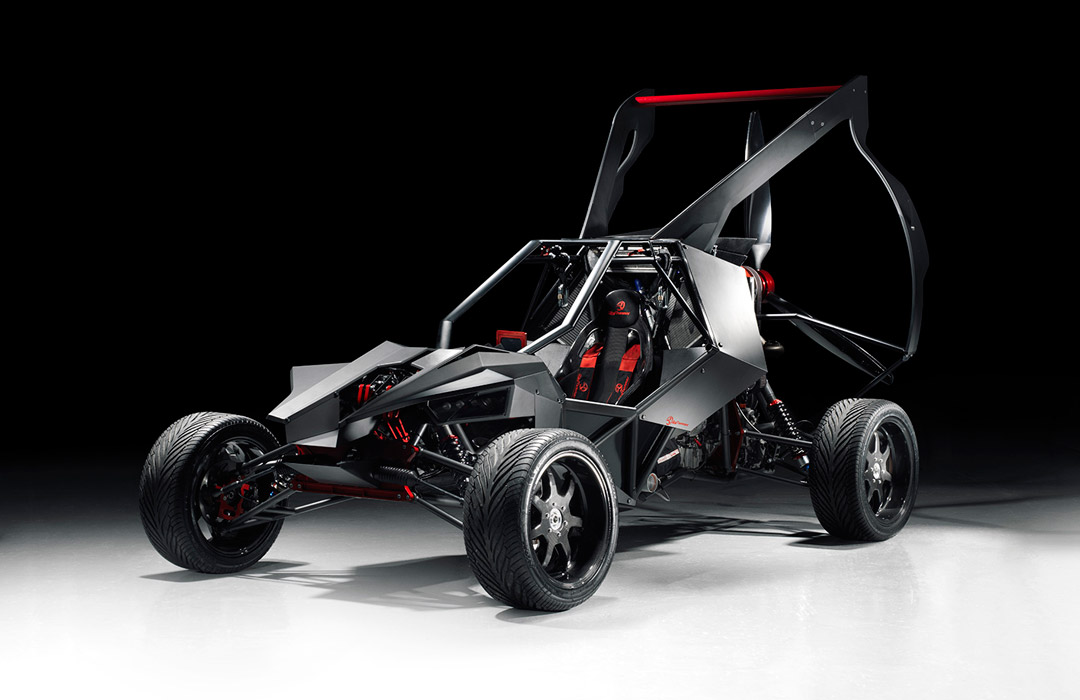 (Above) The low-weight, high performance series of rotary engines designed and manufactured by Rotron are used in Unmanned Aerial Vehicle (UAV) applications as well as being developed as part of the CR700P motorcycle project and the SkyQuad flying car.

Gilo Cardozo MBE, appears to have been born with adventure running through his veins and that adventurous spirit has led to the creation of one of the UK’s most innovative and exciting manufacturing groups, Gilo Industries. As an enthusiast for the sport/hobby of paramotoring, Gilo saw a fantastic opportunity to develop the technology and, in spite of having no formal engineering qualifications, he created Parajet in 2001. This business is now seen as a world leader in the design and manufacture of paramotors, or powered paragliders.

The success of Parajet was helped along the way by Gilo’s sense of adventure, when he partnered with kindred spirit Bear Grylls, taking on the challenge of paramotoring over Mount Everest, a feat they accomplished in 2009, achieving what was said to be the impossible by flying at an altitude of 29,494 ft. In order to achieve the ‘impossible’ Gilo had to push the engine technology beyond existing limits. He needed to create an engine that was both powerful and light enough to handle the dramatic changes in atmospheric pressures that would be encountered. The resulting engine development, which produced 95 hp, compared to the existing 30 hp maximum, also featured a dual fuel injection system. This engine was to be the catalyst for the second group company, Rotron Power.

we have used XYZ now for several years and they have proved excellent workhorses, producing high-quality work day in and day out

Helping to get both of these early businesses ‘off the ground’ was Gilo Industries’ investment in an in-house machining capability, one that has resulted in a long and close working relationship with XYZ Machine Tools. “In the early days we had looked around for suitable machine tools and XYZ impressed us with their overall performance and delivery,” says Gilo. “As a result, we have used XYZ now for several years and they have proved excellent workhorses, producing high-quality work day in and day out. Adding to this is the ease of use of the Siemens control system, which enhances the knowledge already available on the factory floor. Another aspect in choosing XYZ is the help and support that we have received over the years from Managing Director Nigel Atherton and, the XYZ Machine Tools service and applications department. The value that we attach to this service means that whenever we wanted to add to our machining capability, we had no hesitation in looking at and choosing XYZ.”

The value that we attach to this service means that whenever we wanted to add to our machining capability, we had no hesitation in looking at and choosing XYZ

The main machine shop is located in the Rotron building and benefits from two XYZ 710 VMC vertical machining centres alongside an XYZ Mini Mill 560, all with Siemens controls. These three VMCs are supplemented by an XYZ ProTURN SLX355 lathe equipped with the ProtoTRAK control, and are used for day-to-day production for both the Rotron rotary engines and the Parajet products. With the development of the Zenith Paramotor in May 2012, Gilo Industries had created the world’s first fully CNC’d paramotor. This was to change the landscape of paramotoring as its groundbreaking design has influenced a wave of other paramotor manufacturers who have followed suit and Zenith inspired design cues can now be seen throughout the industry. The Zenith design is not just about form, it is also about function, this has been achieved through the unmatched precision manufacturing and consistency in production. This not only brings a new flying experience to pilots, but also continues Gilo Industries’ record of innovation, by creating a more honed, dynamic, efficient and more practical solution. Engines produced by the Rotron division are now widely used not only for recreational activities, but are also the first choice for many Unmanned Aeronautical Vehicle (UAV) applications in use by military and commercial customers.

Having two successful design and manufacturing businesses would be enough for most people, but not Gilo who had other ideas that involved flying cars and racing motorcycles. From childhood Gilo had dreamt of building a flying car and this became reality with the development of SkyQuad. And in 2009 the first incarnation completed a feat of car/aircraft endurance, travelling 7000 kms, departing from London, via Europe and the Straits of Gibraltar, before arriving in Timbuktu. Gilo completed this trip alongside former British army officer and adventurer Neil Laughton and at the end of the journey the world was in no doubt that the concept of a flying car was indeed a reality. With the concept now proven, Gilo wanted to ensure that it was a sound commercial proposition. “Designing and engineering a practical flying car is a challenging process and we are continuing to hone the details and design of the SkyQuad, and the next pre-production prototype is currently in development. The ultimate aim with SkyQUAD is to tackle the well-established fantasy that has permanently captured the imagination of millions of erstwhile adolescents in which flying cars are part of the fabric of a futuristic landscape head on.”

Gilo identifies that all previous attempts at flying cars have been compromises between form and function. In recognising this, the team at Gilo Industries set themselves the challenge of creating a vehicle that was light enough for extended flight times, yet tough and agile enough to tackle tough terrain. Aesthetics were also important in that the team wanted to encapsulate the sense of adventure that comes with a vehicle that can be driven around on and off-road and also fly. “We needed to meet the engineering tolerances and reliability for not only a road going vehicle, but also for a sports light aircraft – whether racing over sand dunes or flying 10,000 ft in the air, we wanted our customers to have complete knowledge and confidence that the hardware is more than up for purpose,” says Gilo. To assist in that process Gilo Industries established a research and development facility and took delivery of additional machines from XYZ Machine Tools to carry out this development prototype work. The first was an XYZ ProTURN SLX 425, which was recently joined by a second XYZ Mini Mill 560.

We will be maximising the use of the XYZ Mini Mill 560 and XYZ 710 VMC alongside our other XYZ machines, to deliver a creative and rigorous approach to design and engineering that allows us to continually push the edge

Adding to the workload of these machines is the recent awarding of a prestigious grant that will see Gilo Industries Group and Rotron develop products for National Aerospace Technology Exploitation Programme (NATEP). This grant is for research into new and innovative methods for extending the flight duration and longevity of UAV engines, and to develop a high endurance heavy fuel rotary engine for Unmanned Aerial Vehicle (UAV) applications. The XYZ Mini Mill 560 will be used for the development of prototype parts for these NATEP projects that will allow the team to explore new directions in engine design and ultimately support the engine test programme. “The next 18 months are exciting times for us as we have a host of other exciting research projects being developed. These will go beyond people’s current imagination and can truly be classed as disruptive technologies that will change the face of personal aviation. We will be maximising the use of the XYZ Mini Mill 560 and XYZ 710 VMC alongside our other XYZ machines, to deliver a creative and rigorous approach to design and engineering that allows us to continually push the edge”.

One of the more ‘down to earth’ developments at Gilo Industries is the work being undertaken on the second race prototype of the CR700P motorcycle. This work is centred around the integration of Rotron patented LCR cooling system technology into the current 700cc rotary engine design. This cooling system draws water through the engine’s eccentric shaft, this helps with heat dissipation in the needle roller bearings between the rotor and the eccentric shaft lobe. The result is a significantly reduced internal heat signature for the engine. The near future target is to have the race version of the CR700P competing at the Isle of Man TT. That said, development of a road legal version is already underway, with many key components having already completed the final design stage.

Gilo Industries is a success story for British manufacturing and engineering excellence, but also for the determination to follow dreams, they do sometimes come true. “We are proud to be British and believe that what we as a company have to offer, alongside so many others, in terms of brilliant engineers and creative talent is not only unique and inspiring, but also that British science, technology and engineering companies are world class. The ethos of the business is to endeavour to be at the cutting edge of technology and deliver products designed, engineered and manufactured without compromise. This is an ambitious aim, which can only be delivered with the best people, the right technology and the combination of enthusiasm, belief, approach, and attitude that permeates through the Gilo Industries Group. We believe that British innovation truly can be great, and we are happy to demonstrate what’s possible and showcase British talent overseas in such a dynamic and powerful way. As we continue to grow there are opportunities here for aspiring engineers who want to express themselves in a dynamic, forward-thinking working environment, surrounded by like-minded people with similar ambitions.” Gilo Cardozo MBE.

How it all started for Gilo Industries with the creation of Parajet to manufacture Paramotor systems. 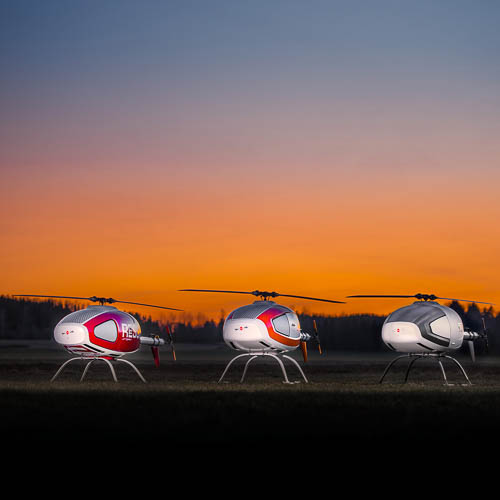 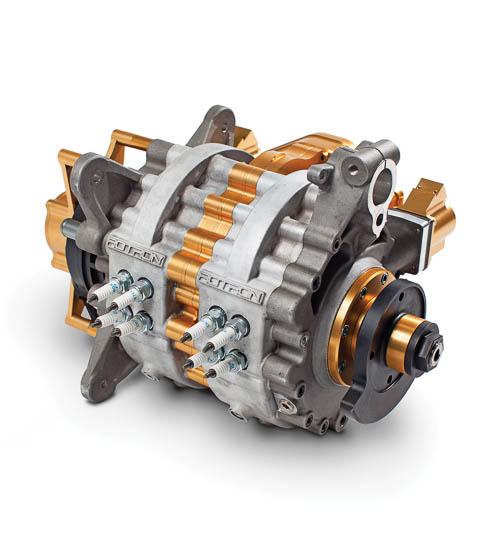 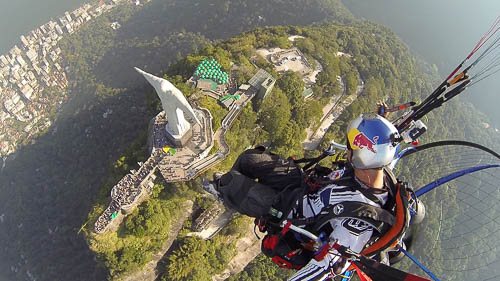 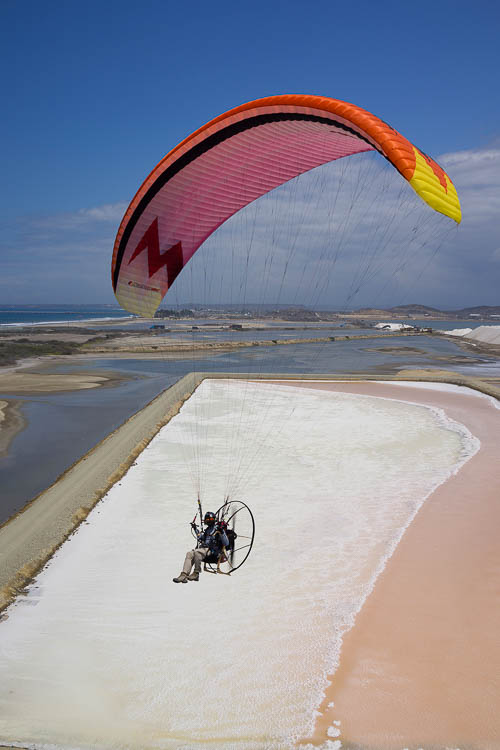 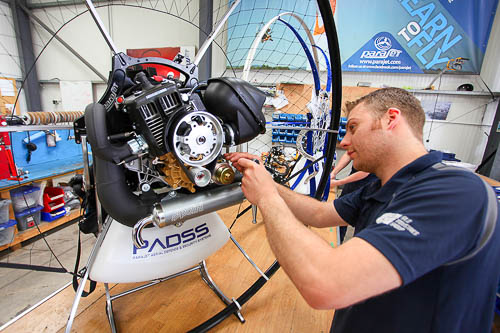 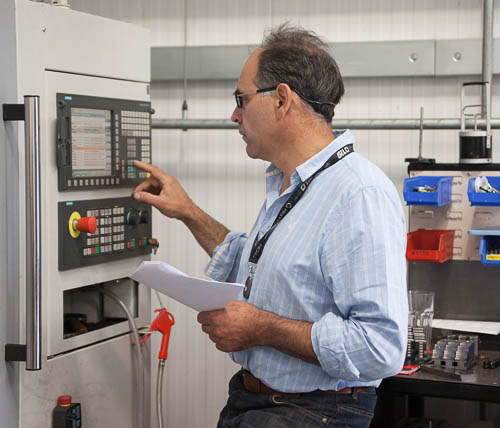 Machining for both production and development at Gilo Industries is carried out on a range of XYZ Machine Tools. 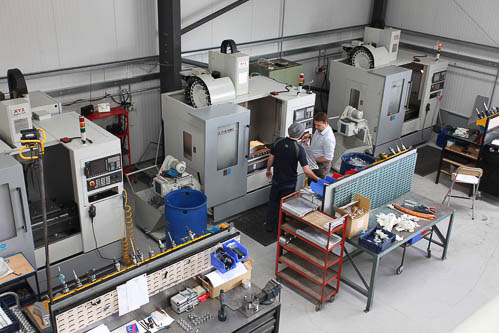 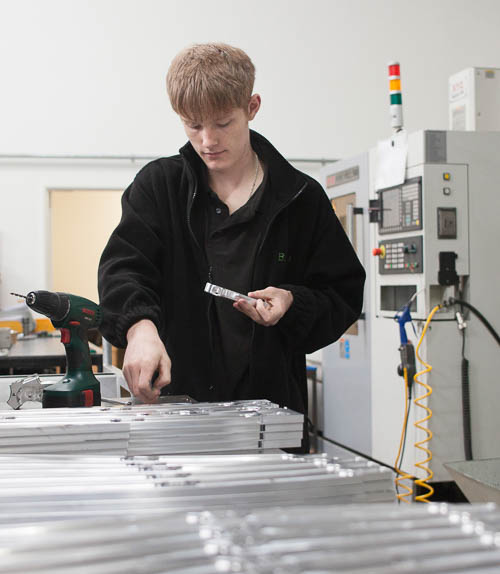 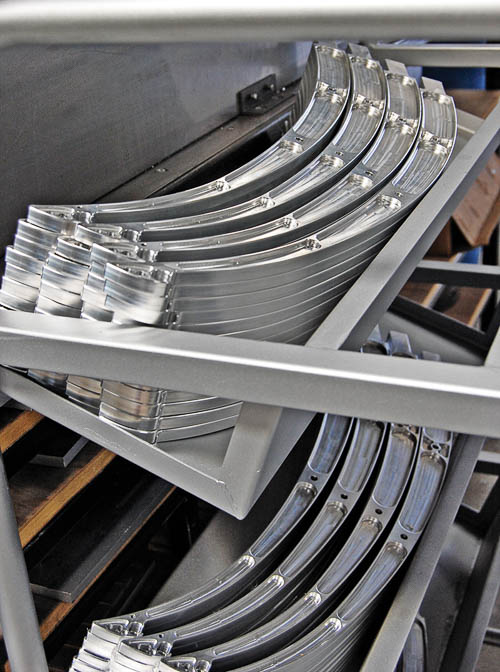 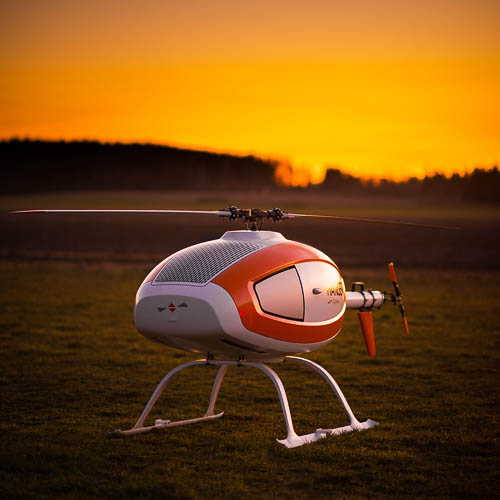