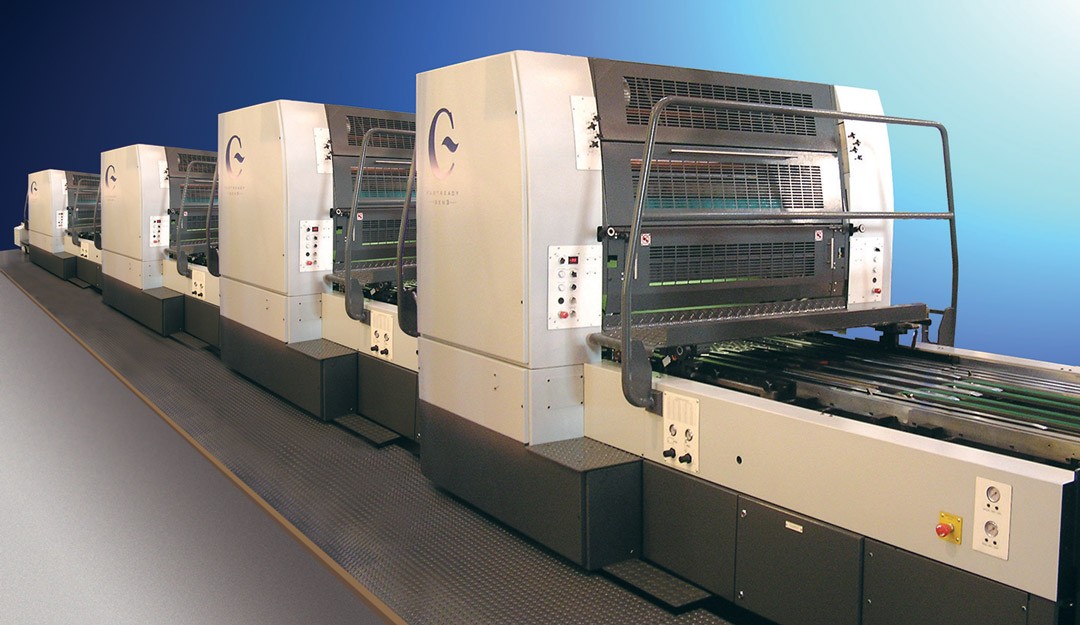 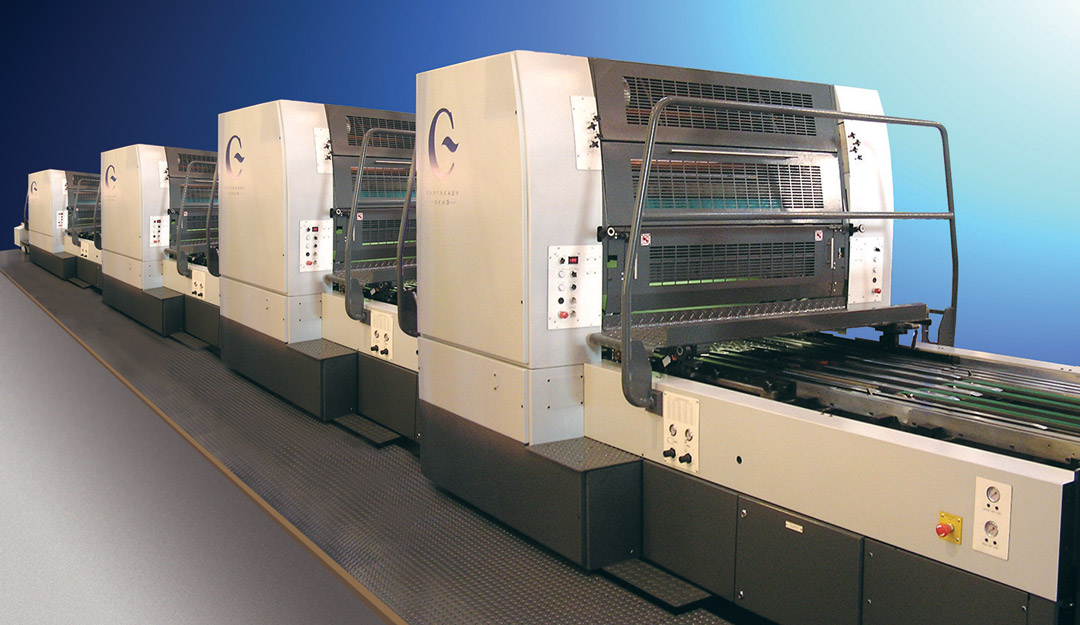 For fans of what is perceived as the UK’s favourite chocolate selection the quality work undertaken by Crabtree of Gateshead will be right up your street. Established over 100 years ago Crabtree is a world leader in the design and manufacture of metal decoration presses, or in layman’s terms printing presses for metal objects, such as food containers and tins of chocolates.

Crabtree has maintained its status as a world leader through constant product development and its latest FastReady Gen 3 Premium presses are testimony to that. With a capability of printing six colours, these multi-million Pound machines are able to print up to 7200 metal sheets, measuring 1200 mm by 1000 mm, per hour. The big advantage being the speed at which the press can be changed from one product to another, the FastReady Gen 3 modular design allowing it to lay claim to being the world’s quickest when it comes to changeover times between print runs.

In addition to manufacturing complete systems, Crabtree also has a strong market for spares for the many hundreds of machines it has sold over the years. These spares, along with the majority of parts for new build machines are produced in-house, maintaining that prestigious ‘Made in Britain’ element that the company, which exports to 90 countries, feels is vitally important. “We take added value to its extreme here,” says Neil Graham, Crabtree’s Machine Shop Supervisor. “We take raw steel and cast iron and turn it into multi-million Pound end products and to achieve that we have been investing in new machine tools on a regular basis since the management buyout of the business in 2001.”

The work we are asking it to do is well within its capabilities and the XYZ SLX 555 just gets on with whatever we throw at it, doing what it does really well.

Part of the investment process sees older machines being replaced and a case in point is the recent arrival of an XYZ SLX 555 ProTURN lathe with a 3 metre bed. This machine is being used to take up machining capacity left when Crabtree disposed of a 20 year-old turning centre, that when new cost £500,000. “We recognised that the turning centre wasn’t being used to its full capacity, it needed highly skilled people to program and operate it, so we looked around for an alternative that could provide straightforward turning capacity capable of handling the wide variety of components that we produce, that range from intricate shafts measuring a few millimetres in diameter to printing rolls that could be a couple of metres long and 500 mm diameter or more,” says Neil Graham. “We did wonder if a machine priced at £55,000 could replace the expensive machine we had, but from day one the XYZ has performed perfectly achieving the tolerances that we need, down to nine microns on some bores without fuss. The work we are asking it to do is well within its capabilities and the XYZ SLX 555 just gets on with whatever we throw at it, doing what it does really well.”

In our experience if we had encountered the same situation with the turning centre the minimum training period would have been three months, even then supervision would have been required, so the ProtoTRAK has been a breath of fresh air

A key point with the XYZ SLX 555 ProTURN lathe for Crabtree was the ProtoTRAK control system. Like many companies they struggle to find highly skilled people and the ease of use of the ProtoTRAK system has already proved invaluable when the original operator decided to leave the company. His replacement had just one day’s training at XYZ’s northern showroom, then spent a week shadowing the original operator before he left. After such limited experience of the ProtoTRAK he was ‘flying solo’ programming the machine. “In our experience if we had encountered the same situation with the turning centre the minimum training period would have been three months, even then supervision would have been required, so the ProtoTRAK has been a breath of fresh air,” says Neil Graham.

The XYZ SLX 555 ProTURN is the largest ProtoTRAK controlled lathe in the XYZ range and features a 3 m between centre length with a 2.9 m maximum turn length, the swing over the bed is 560 mm and the 11 Kw (15hp) spindle has a 30 – 1800 revs/min capability over two ranges. Supporting all this is a one-piece solid, ribbed, cast base, with a 500 mm wide bed width that creates a substantial and rigid machining platform.

Crabtree of Gateshead has an inventory of over 30,000 parts that customers can call on for spares, so a reliable manufacturing environment and control over that process is vital to their efficient running of the business. So the performance of the service and support of its machine tool suppliers is paramount. “In that regard XYZ scored highly from day one, with the XYZ SLX 555 being delivered on time and within a couple of hours of it being offloaded from the wagon it had been commissioned and was cutting metal. In terms of after sales service there has been no call for support as the machine has operated faultlessly. The XYZ machine is proving to be excellent value for money for Crabtree of Gateshead and the ProtoTRAK control is perfect for the mix of low volume work that they are asking the machine to produce.” 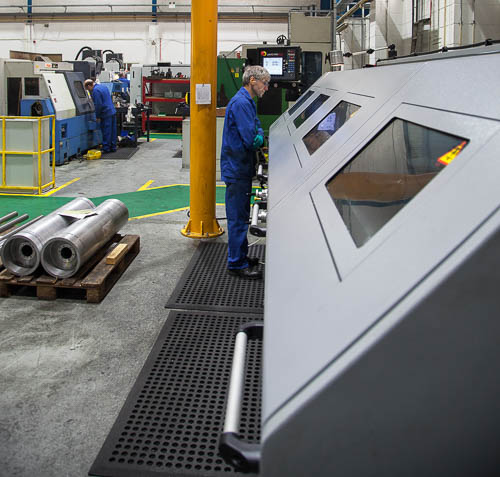 The XYZ SLX 555 ProTURN lathe is used on a wide variety of components from gears to large rollers, replacing capacity left after a high value turning centre was removed. 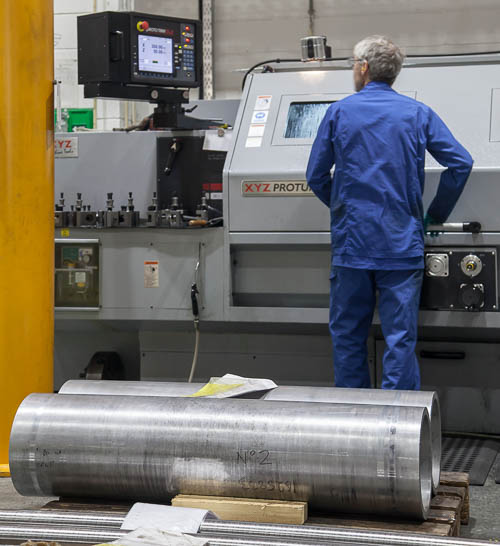 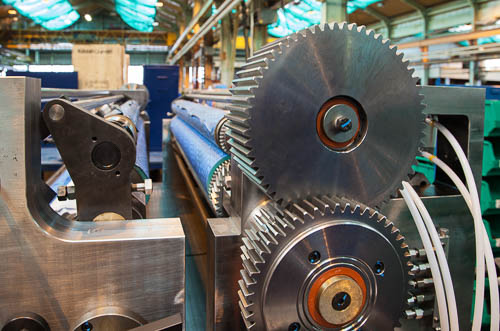