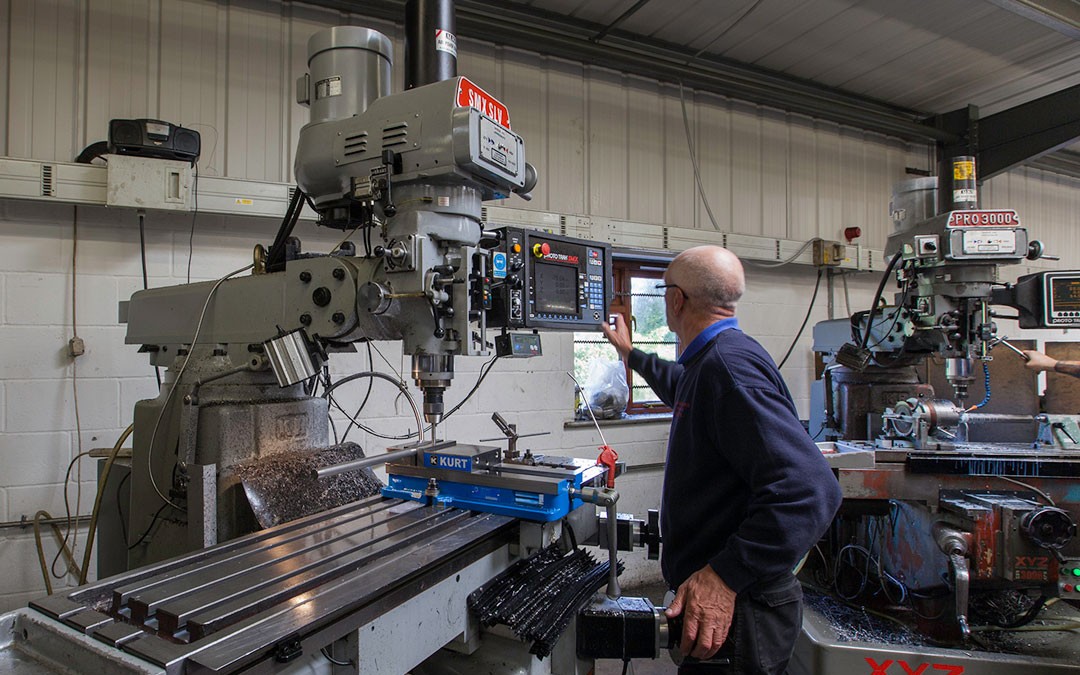 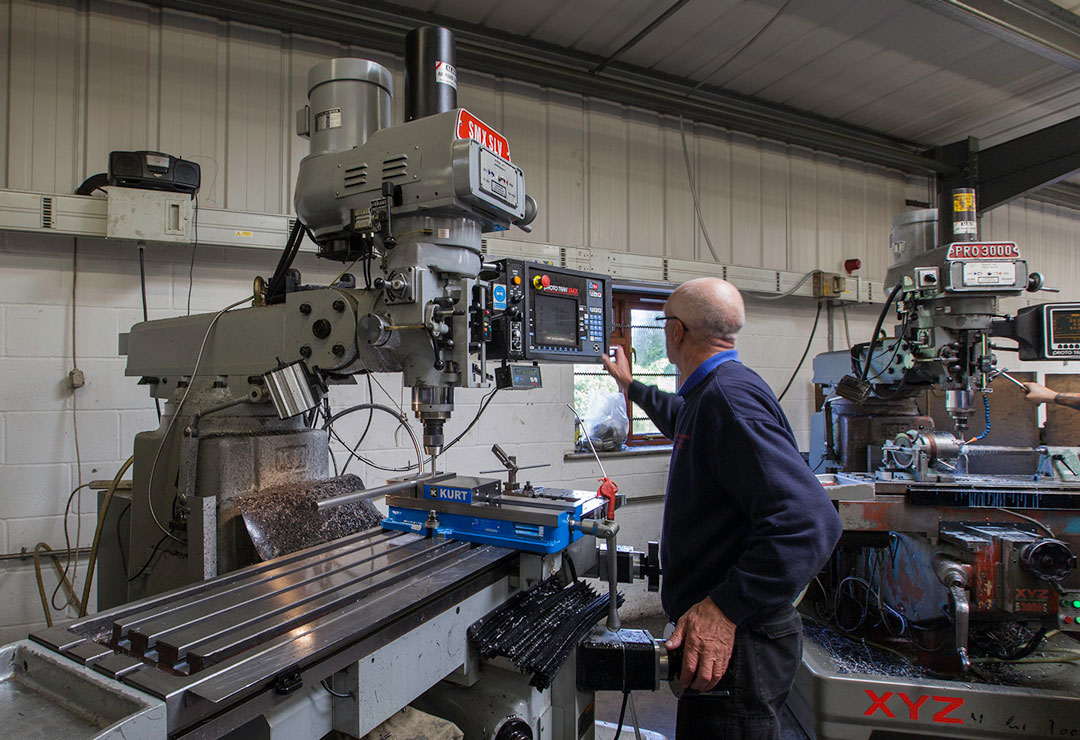 With a history that can be traced back to the mid-1940s Bernard Holmes Precision can be said to be well-established and, over that time, it has developed strong business partnerships with customers across a wide range of industrial sectors for its sub-contract machining capacity. With a reputation for providing everything from one-off prototype components, through to high volume production, it has created an 11500ft2 facility that is split into volume production and one-off/small batch production, on a two thirds/one third basis. Retaining and developing the low volume capability through investment and staff training remains vitally important to the future of this family-owned business.

The ProtoTRAK controlled mills have proved their worth over the years allowing us to deliver low volume components with consistently better quality, faster, and more cost-effectively

“When it comes to the low-volume, one-off to 10-off, work that we do, we are no different from any other sub-contractor in that we face demands for rapid response from customers, who in many cases want parts machined that day. Therefore, we have built our machining capability around this specific challenge by having a mix of manual and CNC/manual machines available to us,” says Bernard Holmes’ Assistant Manager, Russell Thackray. At the heart of this capacity are four XYZ ProtoTRAK controlled machines, the first of which, a turret mill, was installed 20 years ago and is still going strong. A second, more recent SMX-controlled turret mill was brought in to further enhance milling capability, with these two machines replacing six other manual machines.

“The ProtoTRAK controlled mills have proved their worth over the years allowing us to deliver low volume components with consistently better quality, faster, and more cost-effectively than if we had to utilise our full CNC capacity or traditional manual milling. It is the versatility of the ProtoTRAK control that allows us to do that,” says Russell Thackray. While the success of ProtoTRAK in the milling section had proved an outstanding success story, transferring that technology to the turning section proved to be something of a challenge for Bernard Holmes Precision; in part due to the reluctance of one highly experienced and skilled manual lathe operator. “David Pratt has been with us for many years and his manual skills are exceptional, and are something we wouldn’t want to lose, so we delayed purchasing a ProTURN lathe as he had made it obvious that he wasn’t a CNC man!”

any smaller batches are now automatically scheduled to go on the XYZ ProTURN lathes, were we can produce them much quicker

Eventually overriding David’s concerns the company ordered an XYZ ProTURN SLX 425 lathe and, with an air of trepidation at having to work with this ‘box of tricks’ as he described it, David along with his colleague James Rickards went along for training at XYZ. The ProtoTRAK control proved to be a revelation for David and he admits to ‘seeing the light’, so much so that James couldn’t get a look in when the machine was delivered. To keep the peace a second XYZ ProTURN lathe was ordered, this time an SLX 355. “With the two ProTurn machines in place we have freed up considerable capacity on our full CNC section, as any smaller batches are now automatically scheduled to go on the XYZ ProTURN lathes, were we can produce them much quicker. David and James create all of the programs at the machine using the ProtoTRAK control, which again gives us much greater flexibility, as we know that anything can go on these machines and be programmed and machined in a very short space of time,” says Russell Thackray.

Having had the ProtoTRAK mills for such a long time, we knew how effective the control system could be and we should have migrated our turning capacity to XYZ machines much sooner than we did

The XYZ ProTURN lathe range is built around a solid one-piece ribbed casting that provides a stable platform to maximise their machining capabilities. With eight machine configurations in the range, with between centre distances of up to three metres and swing over the bed up to 560mm they are capable of machining a wide variety of components. The XYZ ProTURN SLX 425 has a swing over the bed of 480mm and the option of either a 1250mm or 2000mm between centre distance, with a 7.5 kW (10hp) spindle with up to 2500 revs/min available driven by a three speed gearbox. The smaller XYZ ProTURN SLX 355 has a 360 mm swing and 1000mm between centres, with a 5.75kW (7hp) spindle motor capable of 4000 revs/min. The entire range is controlled by the innovative XYZ ProtoTRAK CNC control, with its intuitive conversational programming system that ensures that someone with little or no CNC experience can be programming complex components within a few hours of seeing the control for the first time.

“Having had the ProtoTRAK mills for such a long time, we knew how effective the control system could be and we should have migrated our turning capacity to XYZ machines much sooner than we did, but now that we have made that step we are yet again seeing great benefits with the ProTURN lathes able to take small batch work off our expensive CNC machines, we can produce the jobs faster and with the same if not better quality. This additional capacity frees up the CNC section to concentrate on longer batch runs which they are better suited for. So yes, we should have done it sooner, but now that we have we will quickly move to replace the two remaining fully manual lathes with one more ProTURN,” says Russell Thackray. 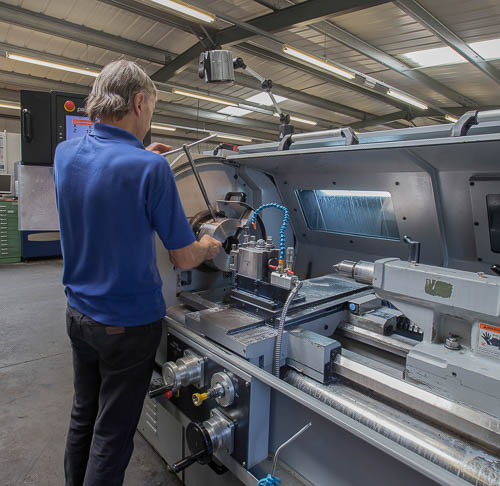 (Above) David Pratt who while sceptical was quickly convinced of the merits of the ProtoTRAK control system. 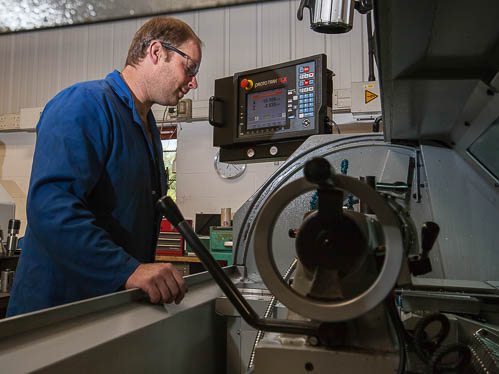 (Above) James Rickards who with the arrival of the XYZ SLX 355 lathe no longer has to share with David.