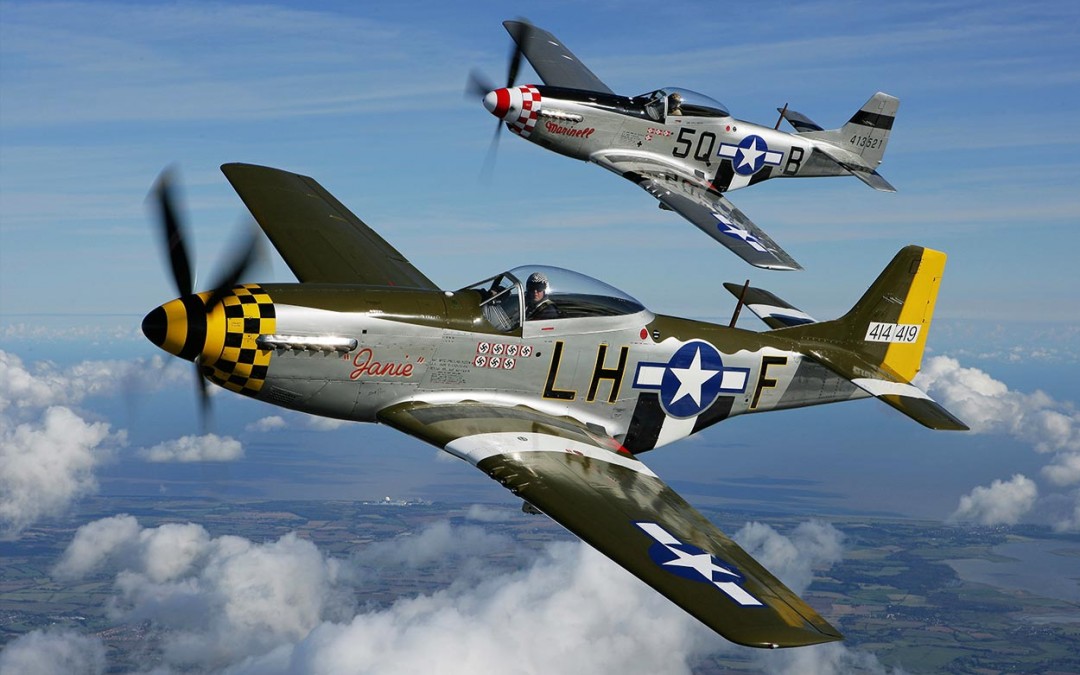 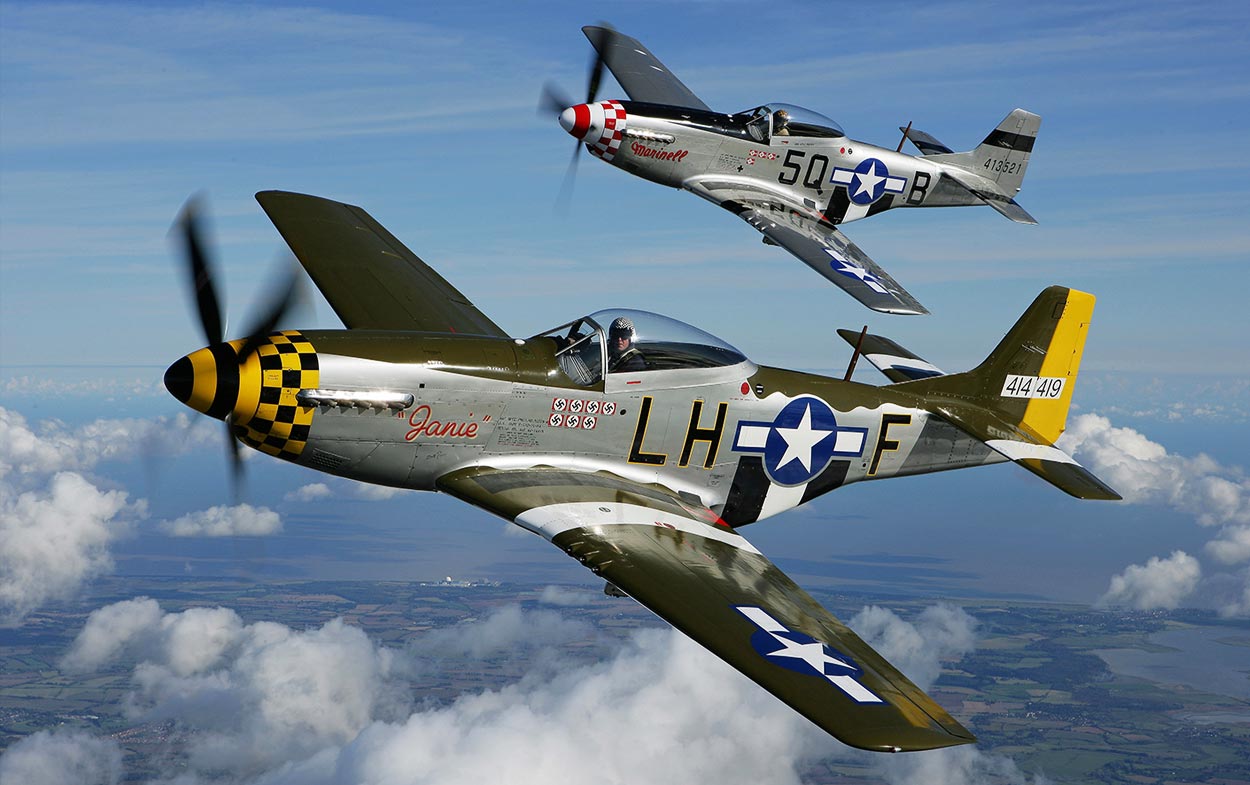 (Above) Maurice Hammond flying one of his P51 Mustangs

When Suffolk-based Eye Tech Engineering was created by Maurice Hammond back in 1985, its ambition was simply to provide a precision sub-contract service for customers local to it in East Anglia. However, 30 years later those ambitions have changed somewhat, with the business now split 50/50 between the original subcontracting and the restoration of the iconic Rolls-Royce Merlin engines and component parts for the Vintage Aircraft industry.

The path to Merlin engine restoration began very early on through Maurice Hammond’s skill at flying model aircraft, which, when funds allowed lead to him gaining his own pilots license. Being an engineer he began investigating the mechanical aspect of the aircraft he was flying and undaunted by the aura that surrounded aeronautics, he built his own plane in 1991. Now well and truly bitten by the bug he then bought two identical, but damaged planes and built one good one from the parts. This led to the full restoration of a WW2 Harvard Warbird. Through the connections he made doing this began the manufacture of replacement aircraft parts, which included anything from pistons to propellers, on a commercial basis.

Being unsure which way to turn for replacements we asked our freelance maintenance contractor and without hesitation he suggested XYZ.

With further aircraft restorations, including a Hawker Hurricane and a P51 Mustang, under his belt Maurice gained approval to overhaul the Rolls Royce Merlin engines in his own plane, which in turn led in turn to requests from other enthusiasts for a similar service. In the 15 years that Eye Tech has been restoring Rolls-Royce Merlins, a total of 30 engines have been overhauled, and the time required restricts ‘production’ to just two engines per year. While the manufacture of new parts for the Rolls-Royce Merlin engines is strictly controlled in the UK, Eye Tech saw an increased demand for parts from enthusiasts all over the world and this side of the business now accounts for 50 per cent of Eye Tech’s turnover, with the balance coming from general subcontracting, producing everything from plastic pulleys through to precision engineered parts for food labelling equipment.

The compact footprint is perfect for our situation, but with its toolchanger and impressive capacity for a machine its size it will help to improve our productivity

To help maintain production and efficiency Eye Tech has recently taken delivery of three machines from XYZ Machine Tools, an XYZ 3000 manual turret mill, an XYZ Mini Mill 560 machining centre and, it was one of the first customers for XYZ’s innovative 2-OP portable vertical machining centre. “We knew we had to replace a number of obsolete machines from another manufacturer, as they were becoming unreliable and spares were getting harder and harder to locate as the company was no longer in business. Being unsure which way to turn for replacements we asked our freelance maintenance contractor and without hesitation he suggested XYZ. We then visited the XYZ showroom and were suitably impressed by the solid cast beds used on the machines and, the fact that the range suited our needs completely with the machine footprints making it easier for installation in the restricted floorspace that we have,” says Maurice Hammond.

The lack of floorspace was instrumental in the decision to purchase the XYZ 2-OP portable vertical machining centre. While this machine is designed to be relocated anywhere in a factory, at Eye Tech it remains in one location, fitting perfectly in the limited available space between two other machining centres. With Maurice concentrating on manual machining and the Merlin engine restoration business, the day-to-day running of the machine shop has been handed over to his daughter Leah Young, who joined the business in 2004. “The XYZ 2-OP is being used as a stand-alone machining centre producing a variety of small parts that need milling, drilling, tapping and profiling. The compact footprint is perfect for our situation, but with its toolchanger and impressive capacity for a machine its size it will help to improve our productivity,” says Leah.

What has been most reassuring about the purchase of these three machines from XYZ is the level of customer service.

The XYZ Mini Mill 560 is also under the watchful eye of Leah and it is being used for small to medium batch work of between 25 and 1000 off components. Much like the XYZ 2-OP the XYZ Mini Mill 560 packs a powerful punch with its 15hp/8000rpm spindle and axis travels of 560 x 400 x 500mm (xyz), all of which is supported on a 3100kg solid cast base and column. To ensure a quick transition from their old machines to the new XYZ mills Eye Tech accepted the free training on offer at XYZ’s Nuneaton showroom. Once that was completed they also had the reassurance of the ongoing support provided by XYZ for all its customers, with access to the applications engineers with any questions they may have had when programing the Siemens 828D ShopMill Control on the Mini Mill 560 or the ProtoTRAK control on the 2-OP.

The XYZ 3000 mill is very much Maurice’s domain, with his preference for manual machining. It is used predominantly for jig and fixture type work making full use of its 780 x 410mm x 406mm travel and Newall DP700 digital readout system for positional accuracy. With just an inch of headroom to spare, installation involved removing a wall over the Easter holiday and making use of that access to bring all three machines in at the same time.

“What has been most reassuring about the purchase of these three machines from XYZ is the level of customer service. Everyone we have spoken to has been helpful, the applications engineers are quick to respond to any issues we may have with programming the machines and they always call you back when they say they will. It is also nice to know, should they ever be needed, that XYZ stocks parts for all their machines and a service engineer can be with you very quickly with the tools needed to get you back into production,” says Leah Young. 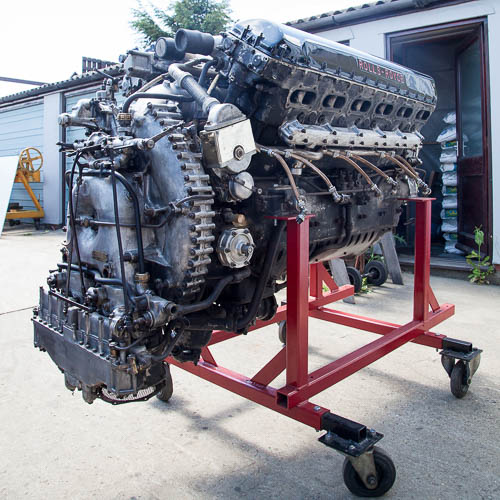 (Above) A Rolls-Royce Merlin engine awaiting rebuild at Eye Tech 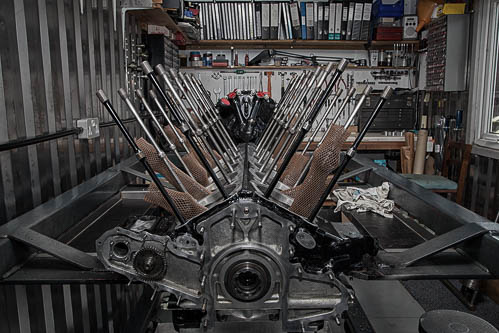 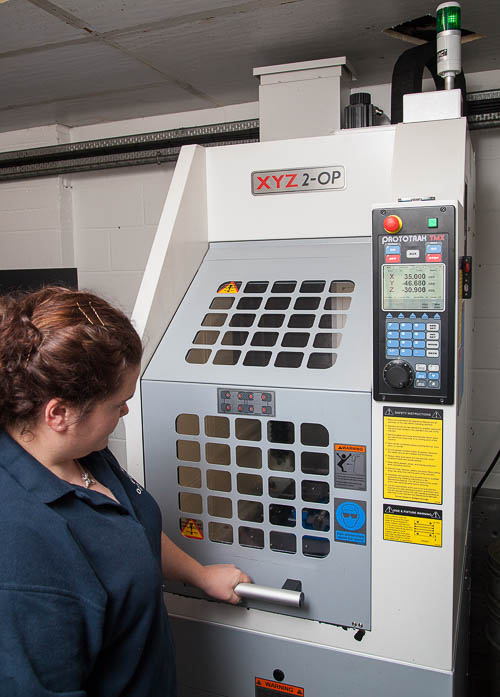