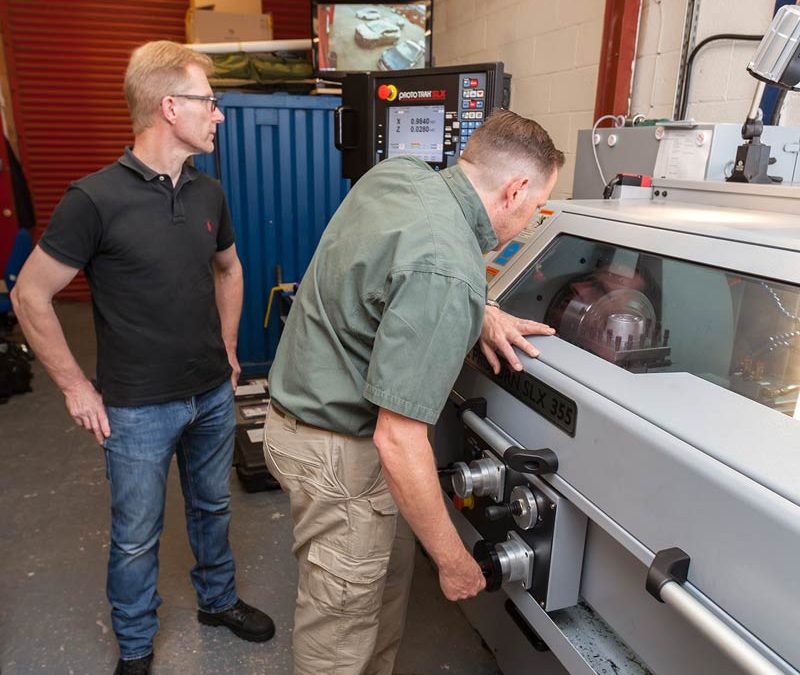 With over 30 years of gunsmithing between them, along with 20 years’ experience at shooting at international level, good friends and business acquaintances Stuart Anselm (Osprey Rifles), Pete Walker (Walker Custom Rifles) and Gary Costello (March Scopes) decided to pool their resources to capitalise on the niche market of bespoke gunsmithing and created PGS Precision Engineering. 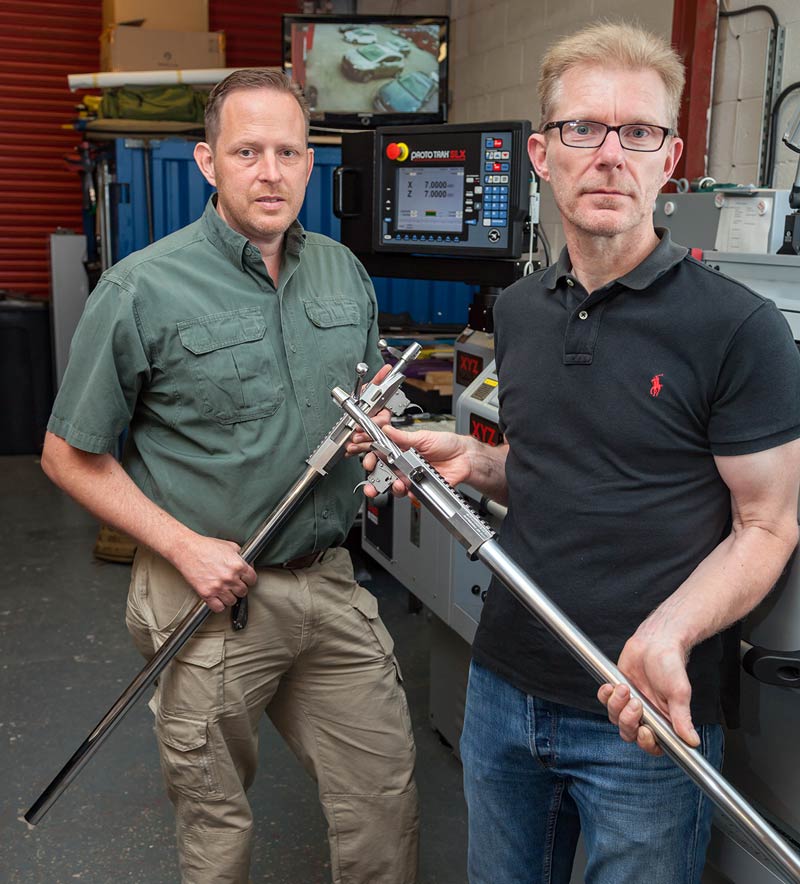 Much of the work that the three partners were involved with was one-off commissions, which did not justify the investment in CNC machining capability. However, a contract for higher volume work made the possibility of upgrading from manual machining a feasible proposition. “This contract was for the machining of rifle barrel blanks, which are already contoured to the final finish with the rifling machined, so our job is to machine the chamber, which is the location for the bullet in the end of the barrel. This precise form is created using a chambering reamer and has to be both accurate in terms of size and also very precise in terms of surface finish. This was our first contract for large 50 calibre military rifles and in addition to the chamber we had to carry out turning and threading to fit the rifle action, as well as the suppressor [silencer]. These increased volumes led us to look into CNC,” says Stuart Anselm.

The response we got from XYZ was excellent, we went down and did some samples, we found the programming to be straightforward and within half a day we had full confidence that the SLX 355 would do what we wanted it to do 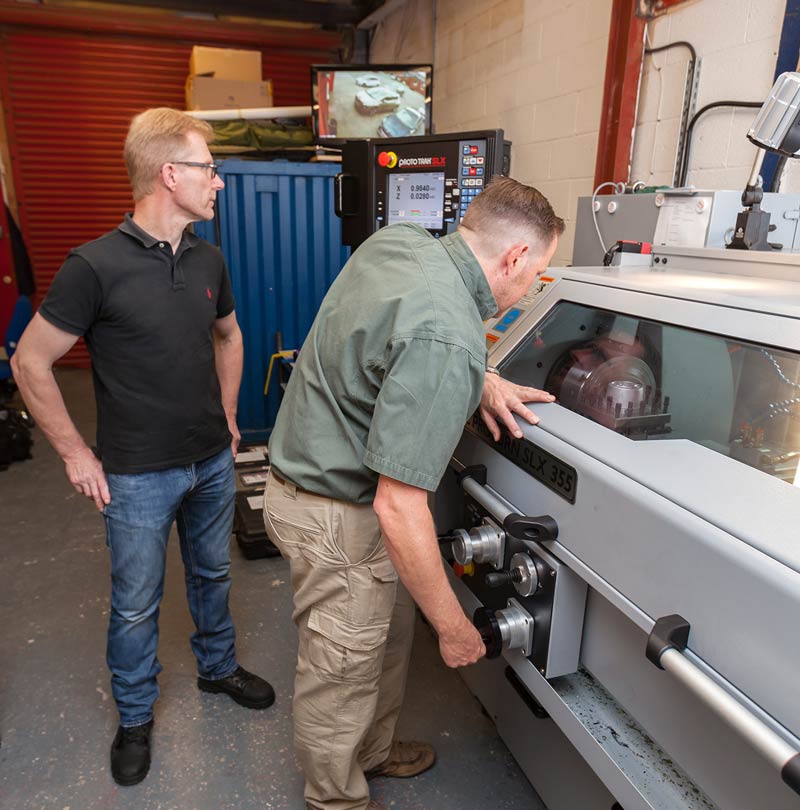 The TRAKING capability of the XYZ SLX 355 has been a major advantage to PGS Precision.

So began a search for a suitable CNC lathe with PGS Precision’s particular requirements in mind, these included the fact that the barrel blanks come pre-machined, but the bore is not necessarily centred, so a four-jaw chuck would be required, along with the manual input that this involves. The tooling that is used requires to be flushed through the spindle from the back of the machine, using a muzzle flush device created by PSG Precision to deliver high pressure coolant, so the machine had to be compatible with that and the spindle bore large enough, and long enough, to allow both the coolant system and barrel to be fully enclosed within it. The machine also had to be capable of machining the 416 Stainless ‘Barrel Steel’ that is popular in gunsmithing.

This was their first foray into CNC so the decision to purchase an XYZ SLX 355 ProTURN lathe from XYZ Machine Tools was an important one, but with the machine meeting the original criteria set by the three partners it also scored highly due to the ease of use of the ProtoTRAK control system. In particular the TRAKing facility that allows the operator to manually run through the program using the handwheels before pressing cycle start. The SLX 355 also scored highly due to its ability to be operated as a manual machine, as while 95 per cent of the work would be programmed the bespoke nature of the products called for manual intervention to achieve that ‘final fit’. The capability to combine the ProtoTRAK control with manual control to make certain operations easier was also a big factor. For example using the SLX 355 it is possible to accurately and quickly produce tapers manually. PGS Precision chose the XYZ SLX 355 over the smaller SLX 1630 as the larger capacity of the 1000 mm between centres would future proof the machining process for longer barrels. Other aspects of the machine that appealed were the 52 mm spindle bore; 4000 revs/min – 5.75 kW spindle, with constant surface speed; and the 150 mm of tailstock travel, which is used for the reaming of the chambers at present.

Adding the automatic tool post was a great decision as we can complete the turning and threading cycles in under three minutes now, we couldn’t hope to get anywhere near that with  a manual system 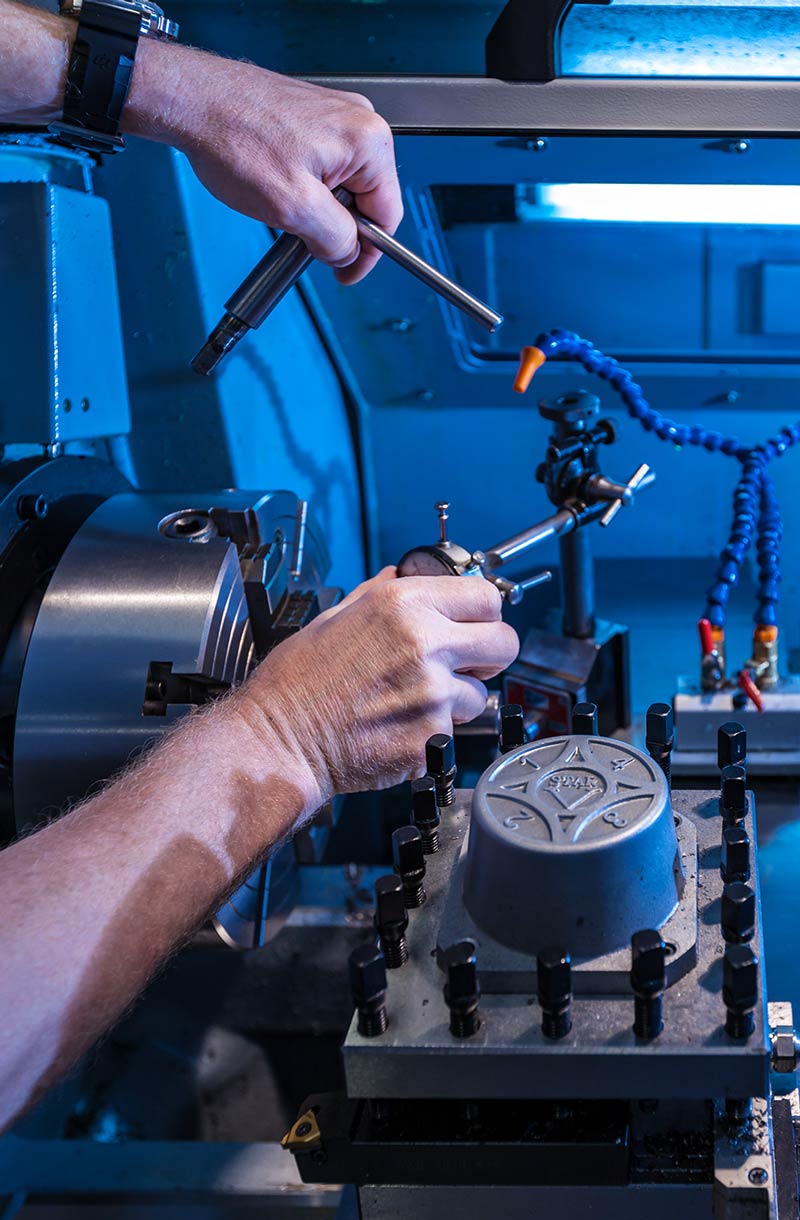 Bespoke rifle barrels have to be ‘clocked in’ before machining.

“The response we got from XYZ was excellent, we went down and did some samples, we found the programming to be straightforward and within half a day we had full confidence that the SLX 355 would do what we wanted it to do and the support that was available from XYZ Machine Tools in terms of training and service added to that confidence,” says Stuart Anselm. “Once the machine was delivered, it was commissioned the same day and we had completed our training within the first week, we then spent a short time manufacturing our bespoke muzzle flush coolant system and we were in production very quickly. We are machining barrels much faster than we ever could using our manual lathes and with the reassurance of consistent accuracy and quality. With the ProtoTRAK control we can also retain the programs for individual customers, this means that if they ever need replacement barrels we can begin the manufacturing process without them having to relinquish their gun for a couple of weeks, as we are certain that what we are producing will be identical to what they already have.” 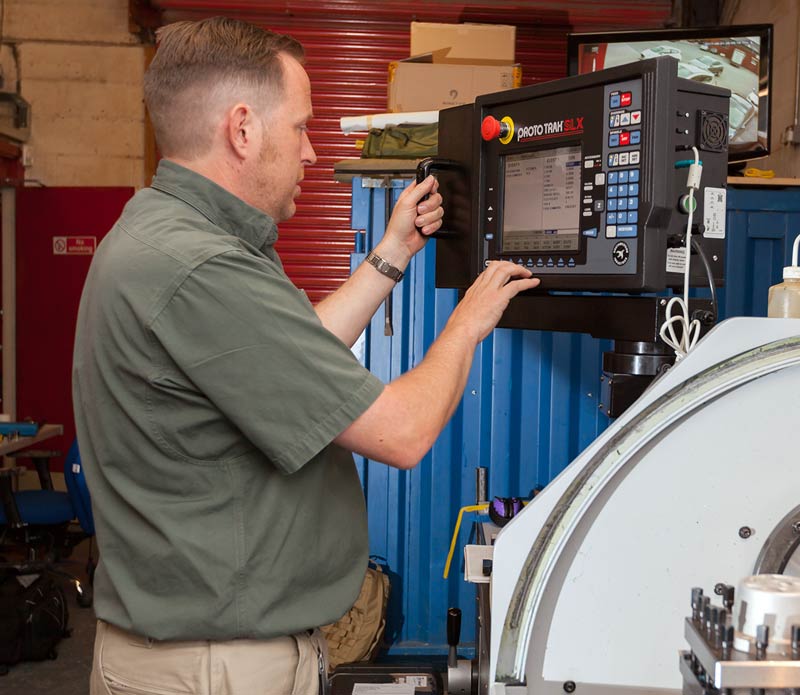 While saving seconds was never a priority for PGS Precision, certain aspects of the XYZ SLX 355 are proving beneficial in terms of cycle time. They specified the optional four-position auto indexing tool post, which is normally used with turning, parting, threading and boring tools at PGS Precision. “Adding the automatic tool post was a great decision as we can complete the turning and threading cycles in under three minutes now, we couldn’t hope to get anywhere near that with a manual system” says Pete Walker.

Since installing the XYZ SLX 355 business has developed for PGS Precision and they will shortly relocate to larger premises next door to another gunmaker. This move will see further collaborations and volumes increasing, which will lead to additional machining requirement, both milling and turning. The plan is to have one SLX 355 dedicated to turning and threading, with a second specifically for the chambering operations, with an XYZ ProtoTRAK mill available for the milling work. “Given the relative low volumes, that can be anything from one-off to 50-off we needed a system that would be quick and easy to program and the ProtoTRAK control on the XYZ machines is perfect for that, furthermore the progression from manual to CNC with the ProtoTRAK control has been very straightforward,” concludes Pete Walker.