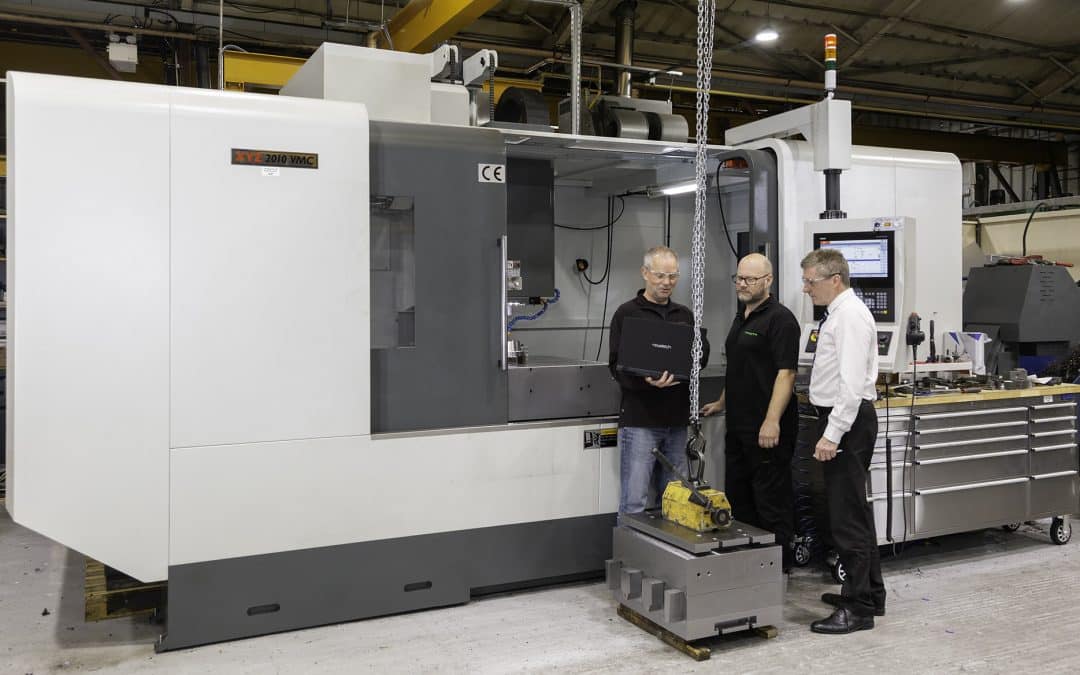 Ferrabyrne is a specialist moulding company predominantly producing bonded rubber to metal technology & suspension systems for the rail industry & commercial vehicles. The Littlehampton-based business manufactures as much as possible in-house, including the design and production of mould tools. Recent growth in demand from its rail customers, driven by refurbishment of existing roiling stock to extend its service life and new projects meant that the company’s toolroom had to meet unprecedented production challenges. This saw a need for improved and increased machining capacity.

“The rail market is very active at present and this has led to unprecedented demand for our products.  Customers such as Hitachi, Siemens, Bombardier, CAF & Stadler are very active in the UK and Europe at the moment” says Mike Wood, Ferrabyrne’s Project Director. “Development of new rolling stock has led to an increased number of new vehicles that our customers are bringing to market and it is a privilege to working with them. We have invested heavily in rapid prototyping to ease pressure at the design stage, but our toolroom was faced with major production challenges. We would typically produce one mould tool every 2 to 3 weeks, at present we have a waiting list of over 40 mould tools with a similar number of assembly tools. Therefore, additional toolroom machining capacity was a priority for us, hence the need for investment.” 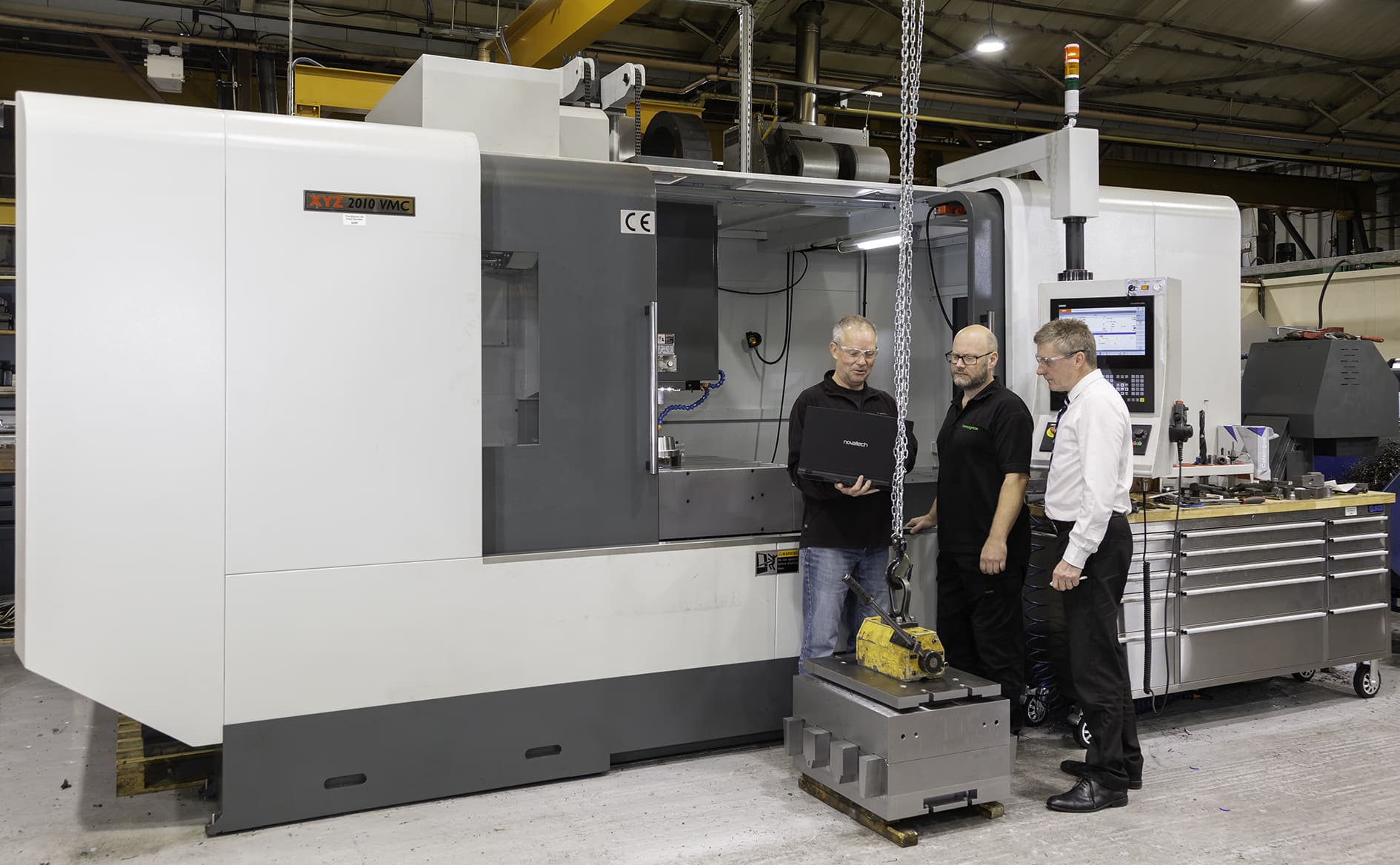 As products have developed in size and complexity, the demands on the mould tools has also increased and the need for a machine capable of meeting these challenges has led Ferrabyrne to XYZ Machine Tools and its XYZ 2010 vertical machining centre. Part of XYZ’s Heavy-Duty range, the 2010 VMC is a box slideway-based machine built on solid Meehanite castings, with the machine weighing in at 20,000kg. One feature that attracted Ferrabyrne to this machine is its 1000 mm of y-axis travel, which is supported on six hardened box ways. “As our work was increasing in size, we were finding that we were having to shuffle work around on our existing machines in order to fully machine them. So, having the large Y-axis was an important part in our decision making and while we did our research the XYZ was the only machine of this type that could give us that,” says Phil Nell, Ferrabyrne’s Tooling Design Engineer. “Our requirements also included a need to be able to quickly set-up jobs for one-off and low-volume production and the XYZ gives us that ability, in combination with our WorkNC and Autodesk software which help us to create complex toolpaths quickly for download to the Siemens control.” 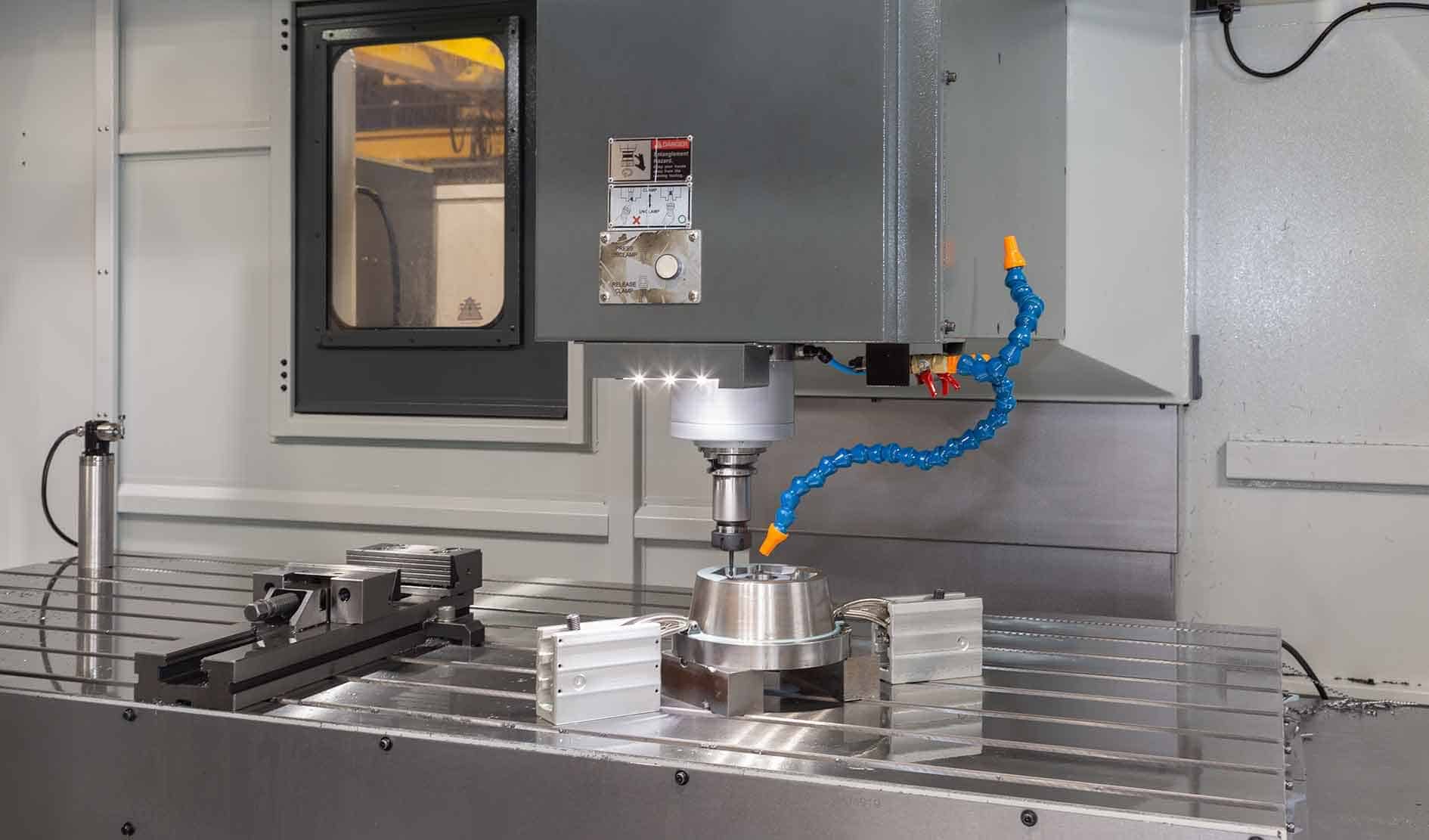 Prior to placing the order for the XYZ 2010 HD VMC the team from Ferrabyrne visited an XYZ showroom for a demonstration and while there, attention was drawn to the ProtoTRAK lathe, in particular the new ProTURN RLX 425 with a 1.25m bed length. This machine features the brand-new RX ProtoTRAK control. “I used ProtoTRAK when it was first introduced, and we have an XYZ SLV turret mill in the toolroom with one of the older EMX controls on it, so I was interested to see the new control and “I have to say its brilliant!” says Phil Nell. The impact that the new control had on Phil and his colleagues saw them go away and produce a justification for the purchase of the RLX 425 which included the elimination of an existing CNC lathe. 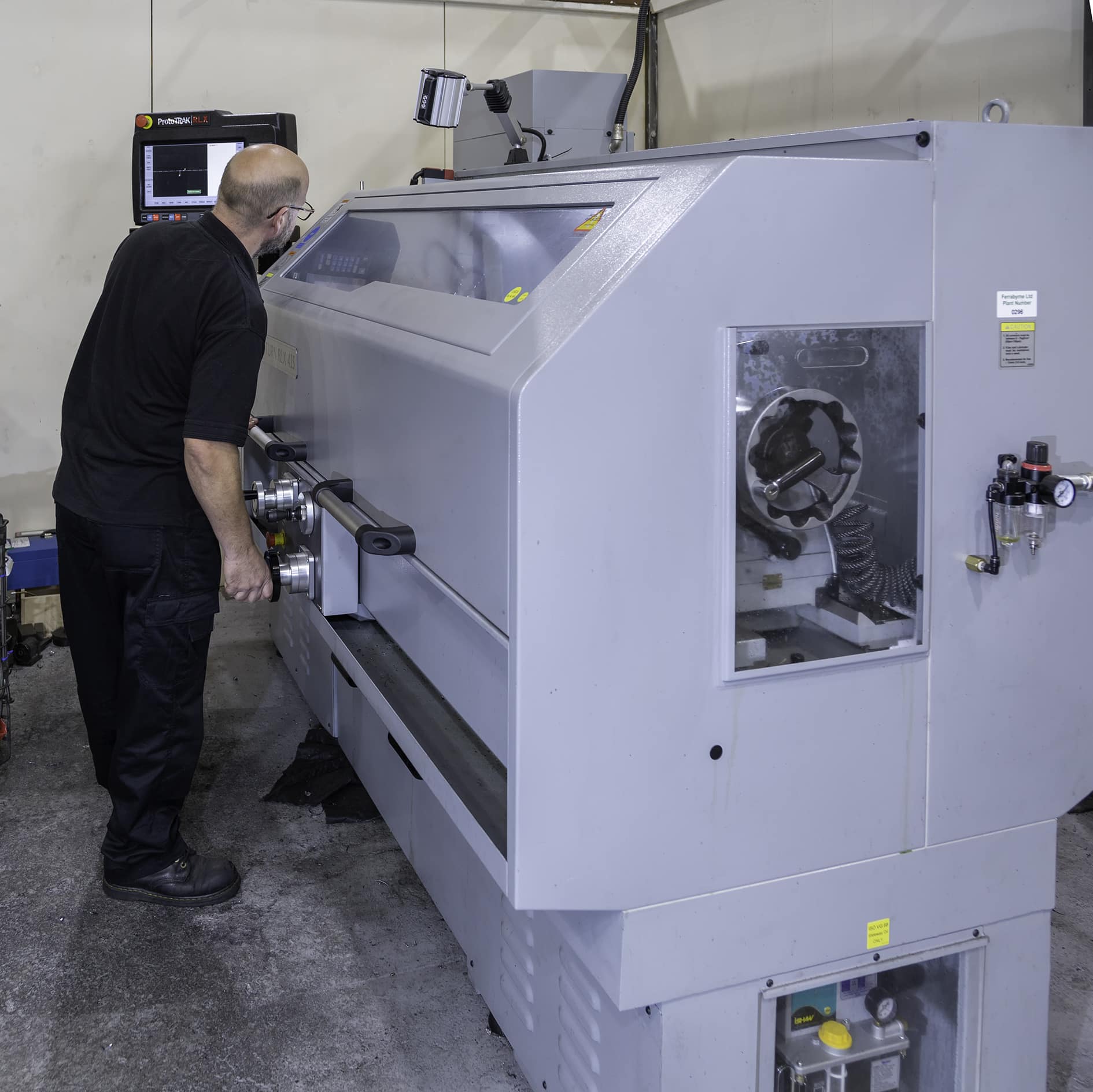 “The benefits of the RLX 425 have fully justified our commitment to purchase it. We did have some resistance from people who were used to the old machine, but the simplicity and ease of use of the ProtoTRAK control quickly won them over. Our efficiency producing low-volume parts has improved, as we can load DXF files for more complex jobs to the control, but still program many jobs at the machine and quickly be in production. But the thing that won most over was the TRAKing facility, whereby we can verify programs before pressing cycle start, this gives a lot of confidence to the operators, it is a perfect machine for our toolroom work.” 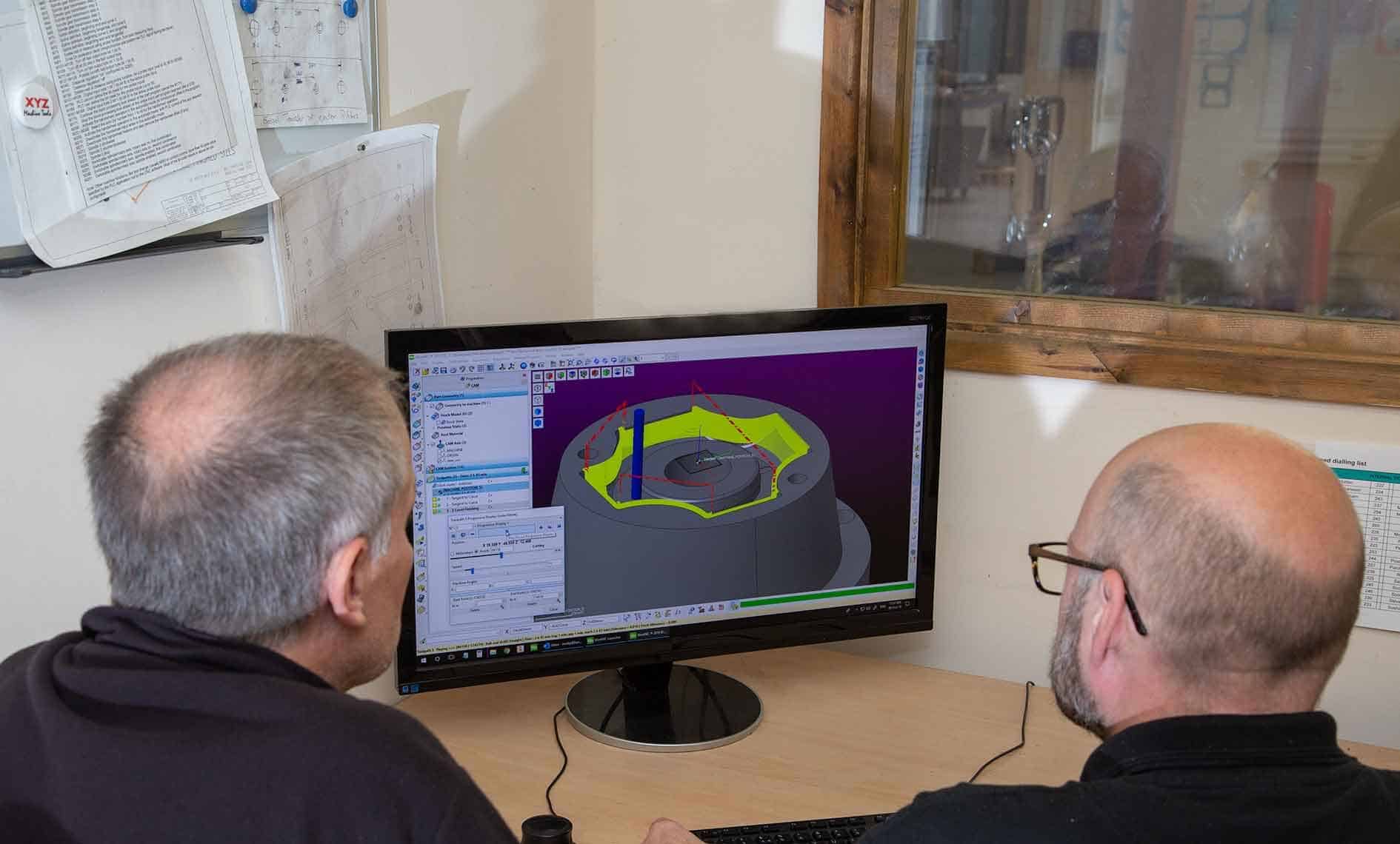 The ability to transfer files from CAM to the Siemens and ProtoTRAK control as DXF files is a major advantage for Ferrabyrne.

The ProTURN RLX 425 sits in the middle of XYZ Machine Tools’ ProTURN lathe range and is available with either a 1.25 or 2 m distance between centres. Performance is enhanced by a 7.5 kW spindle with three speed ranges covering 25 – 2500 revs/min. In addition to the TRAKing facility the ProtoTRAK control also delivers constant surface speed, touchscreen interface, with the now familiar ‘pinch to zoom’ and ‘twist to rotate graphics’; tool library, on-screen speed and feed override among many new features that lead to smoother workflow and greater productivity, yet retaining the familiar ease-of-use that ProtoTRAK users have become accustomed to, making the step up from older versions straightforward.