Phirst Precision Carbide expands its scope with the help of XYZ 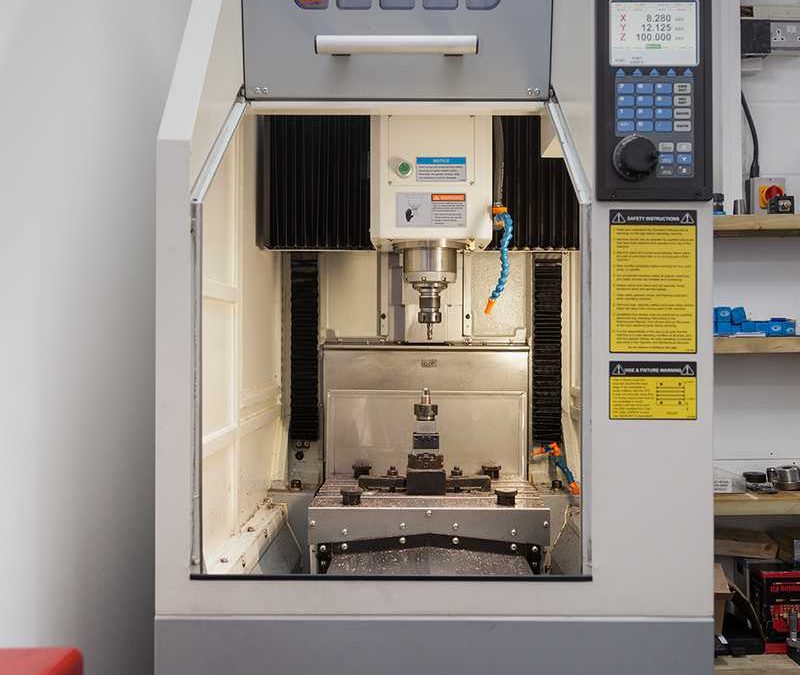 Phirst Precision Carbide based in Southfleet, Kent has built its reputation in the design and manufacture of precision carbide punch and die tooling for the automotive, pharmaceutical and electronics sectors; with its core competency being precision grinding. Since its formation in 1990 the family run business has lived by the mantra of ‘if a job is worth doing it’s worth doing right’ and its investment in manufacturing technology and processes reflects this, the resulting efficiencies have allowed the business to maintain its prices to customers for over 20 years, something that Managing Director Peter Davis is rightly proud of, and also explains its success in maintaining its loyal customer base.

However, in recent years Mr Davis came to the conclusion that he had pushed the efficiencies of grinding carbide as far as he could and recognised the need to expand the capabilities of the business to maximise other opportunities. More recently Phirst Precision Carbide is also experiencing a post-Brexit boost, as just 0.6 per cent of its output goes to UK and European customers, the vast majority of the rest is exported to the American continent, therefore the exchange rate has had a positive impact on business. “With the growth in business, along with opportunities in other areas, we saw potential for spark eroding and invested in that initially, but this created a need to machine electrodes, a capability we didn’t have. Therefore, that along with some other work was put out to sub-contract. The downside with that, was that our low volume, intermittent, requirements meant that our work wasn’t a top priority and we were also paying premium prices, which impacted on customer service,” says Mr Davis.

To overcome this, a vertical machining centre became Phirst Precision Carbide’s next investment. The obstacles in the way of this were a distinct lack of floorspace and no experience of CNC milling. Having seen a ProtoTrak controlled bed mill in action at a neighbouring business Peter Davis recognised the potential of the control, but a bed mill wouldn’t fit. It was then that some literature arrived promoting the XYZ 2-OP portable VMC and, looking at the videos of the machine on the XYZ Machine Tools website (www.xyzmachinetools.com), it was obvious that it was the perfect partner for the spark eroder, both in terms of capability and also size, which even with its 775mm x 1380mm footprint, was a tight squeeze to fit in.

“We initially looked at a bench-top type machine, but sticking with our philosophy of ‘doing it right’ we recognised that this would not have given us what we wanted in terms of machining capability, therefore the XYZ 2-OP became the obvious choice. Having had the 2-OP since June it is already revolutionising our business and opening up new opportunities. We have been able to pull back all of the electrode machining in-house, with the 2-OP having no problem machining the Copper Tungsten that we use, as well as achieving the surface finish and tolerances that we need. In terms of efficiency, the cost savings alone of bringing the work back in-house will cover the investment in the XYZ 2-OP. In addition, the added capability that it has brought is allowing us to take on work that would normally have been carried out on our grinders, a high proportion of hand-finishing has been removed further adding to time and cost savings. On one particular job, which is produced in batches of 60-off it is estimated that there is a labour saving of 3 hours per part.

The arrival of the XYZ 2-OP gives Phirst Precision Carbide complete control over production of electrodes, the fact that it is sited next to the spark eroder also allows one man to mind both machines. In addition to opening up new opportunities, Mr Davis is also looking at every form tool that the company produces to see how machining initially on the 2-OP can reduce process time and simplify production by eliminating manual intervention. But the real key is that we are now able to take on work that would have been turned away previously due to previous methods, including sub-contract would have been uncompetitive in terms of price and delivery.

The design brief of the XYZ 2-OP was to develop a portable vertical machining centre that would be capable of machining first or second operations freeing up valuable spindle time on more expensive machines. Its portability means that cellular manufacture cells can be created anywhere in the factory, by taking the second spindle to where it was needed rather than transferring work around the shop. With its compact footprint and 1100kg weight the machine can be transported on a pallet truck with ease. This compact nature doesn’t detract from its capability, though, with the ProtoTRAK TMX CNC providing three-axis control over a 355 mm x 305 mm x 455 mm axis travels, with rapid feedrates of 15 m/min in all axes. This is combined with an eight-position toolchanger. As standard it is equipped with a 3 hp, 50 – 6000 revs/min, BT30 spindle with a maximum tool diameter of 50 mm. 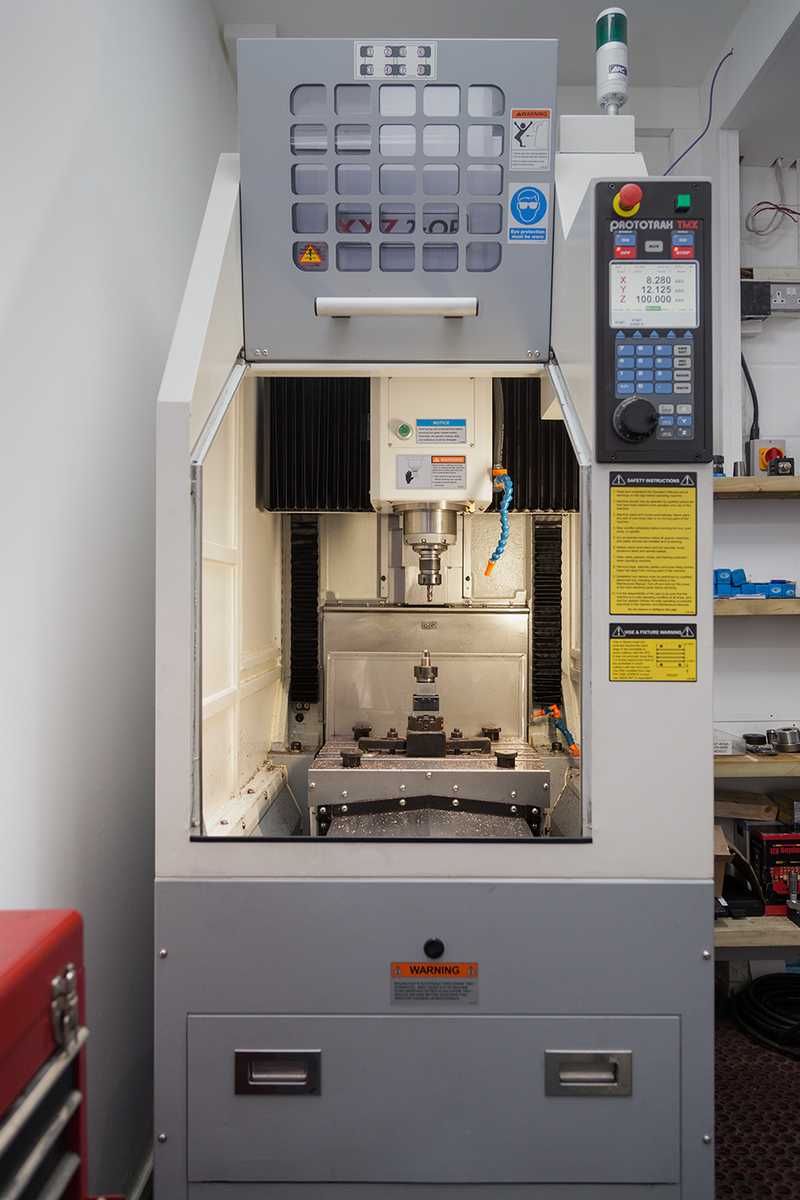 (Above) The XYZ 2-OP installed at Phirst Precision Carbide. 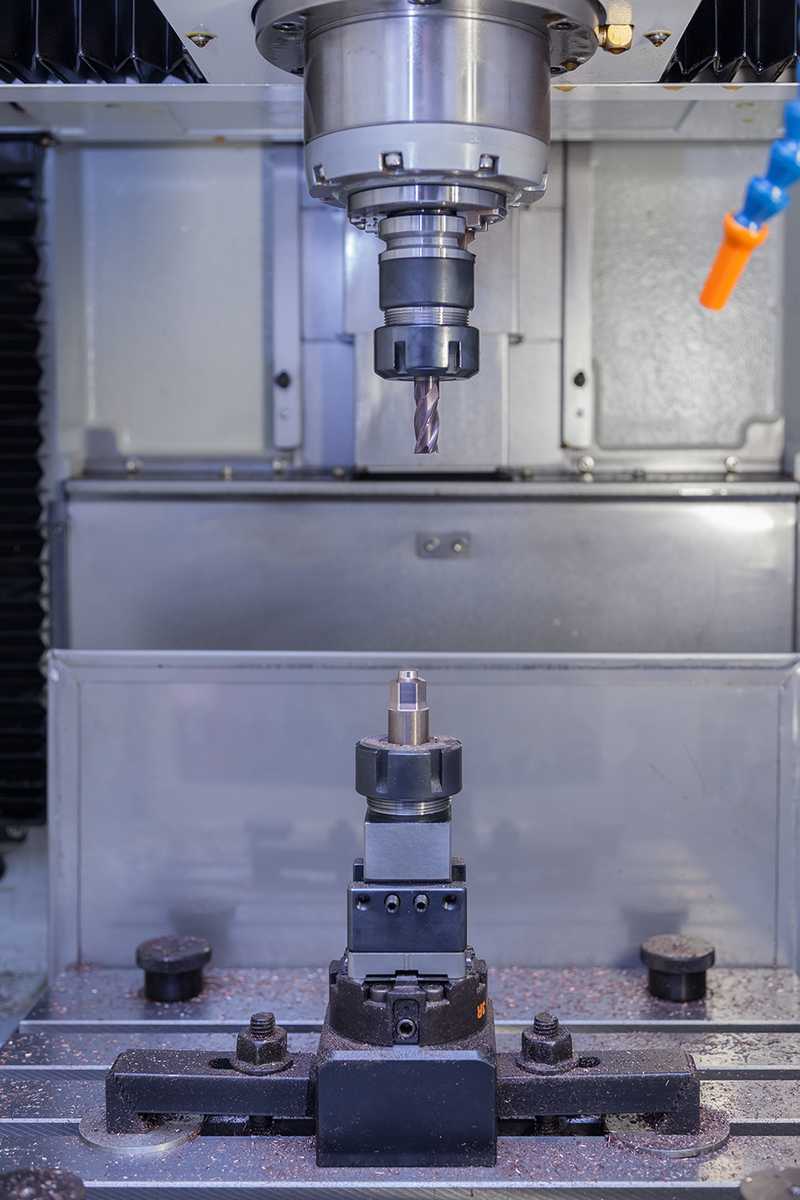 (Above) The generous working envelope of the XYZ 2-OP. 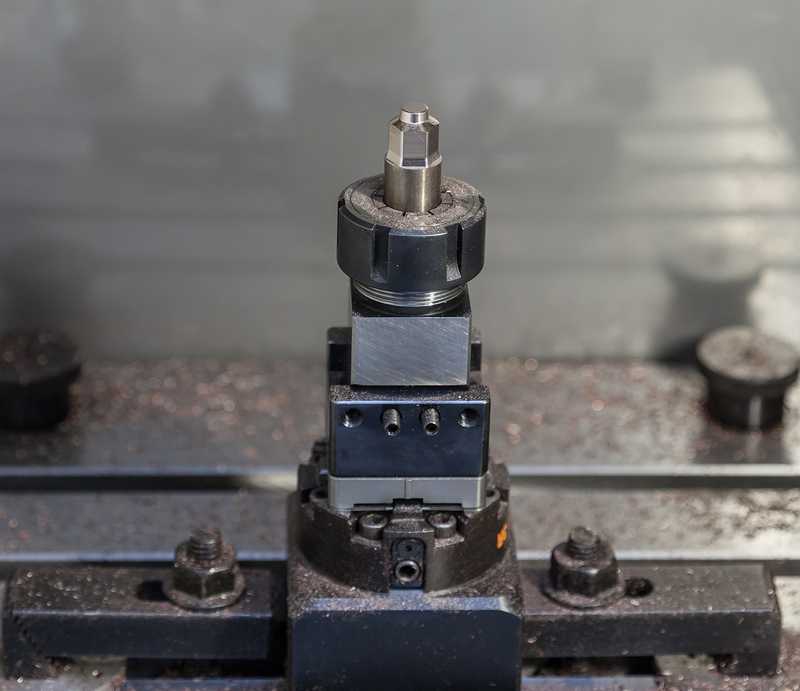 (Above) A close up of a Copper Tungsten electrode machined on the XYZ 2-OP.