Some may suggest that starting a business in the aftermath of the 2008 financial crisis may not be the best idea, but this is exactly what Pete Ivings did. After working in the machining departments of a number of Formula One teams, his precision machining business, Lightning Machining, is now a supplier of parts to over half of the F1 grid, and beyond.

“In 2009 I was working as a contract production engineer at a leading motorsport company and they had a major project on the go that required wire erosion. As this was an area of expertise for me I discussed it with them, put in a proposal to supply these parts and that is what led me to start Lightning Machining. It was me, with a rented wire-eroder, working early mornings and late evenings, while fitting in a day shift in between,” says Pete Ivings, Managing Director, Lightning Machining. The success of this initial contract and the extensive contacts that Pete had in the motorsport field has ensured that the company has grown consistently in the intervening years, with expansion into CNC milling and CNC turning to complement the wire eroding capability.

The XYZ 2-OP arrived in September 2016 to initially help with a new contract for a Formula One team in the build up to the 2017 season, which would be our biggest order to date

The business has continued to develop to service the growing demand for machined parts from not only motorsport, Formula One in particular, but also customers in the renewable energy, automotive, marine, food processing and aerospace sectors. The most recent arrival is an XYZ 2-OP portable vertical machining centre, which sits alongside an existing XYZ CT52 turning centre and an XYZ SLX 1630 ProTURN lathe. “The XYZ 2-OP arrived in September 2016 to initially help with a new contract for a Formula One team in the build up to the 2017 season, which would be our biggest order to date. Initially I looked at buying a used vertical machining centre, but came up against two issues, one was available space on the shopfloor and the second was that the price differential between a good second hand machine wasn’t big enough to overcome the reassurance of buying new, with all of the support that comes with it if required from XYZ Machine Tools.”

The compact nature of the XYZ 2-OP with a footprint of just 775 mm by 1380 mm meant that it would easily fit at the side of the existing XYZ CT52 turning centre at Lightning Machining, allowing it to be used as intended as a first or second operation machine tool to machine faces, pockets, drill holes, rigid tapping and even 3D surfacing (run from CADCAM), as you would from a stand-alone vertical machining centre. Other added advantages over the existing mill that Pete Ivings has, were the eight-position toolchanger and 6000 revs/min spindle on the XYZ 2-OP and the 355 mm by 305 mm by 455 mm axis travels that can accommodate around 80 per cent of the work done by Lightning Machining. Work that encompasses a range of materials, including titanium.

By using the XYZ 2-OP as both a stand-alone VMC and also as an extra spindle for secondary operations maximises the available labour that we have.  In the first six weeks since the 2-OP was installed the machine has run long days and I estimate it has machined £20,000 worth of parts

“The spindle speed of the XYZ 2-OP allows us to achieve high performance and excellent surface finishes and the toolchanger means that we can leave it running unattended for reasonable periods of time, freeing up valuable manpower to do other things,” says Pete Ivings. “By using the XYZ 2-OP as both a stand-alone VMC and also as an extra spindle for secondary operations maximises the available labour that we have.  In the first six weeks since the 2-OP was installed the machine has run long days and I estimate it has machined £20,000 worth of parts. At that rate and with the added productivity gains we are getting from it the payback will be extremely short.”

This level of production equates to an almost doubling of the amount of milling work undertaken by Lightning Machining in the first month since the XYZ 2-OP was installed. The machine has been busy since it arrived and the added productivity will impact positively on the bottom line of the business. Enhancing the speed at which Lightning Machining started to see the benefits of the XYZ 2-OP was the simplicity of the ProtoTRAK control. As they already had the XYZ SLX 1630 with a ProtoTRAK control, training for Pete Ivings on the 2-OP amounted to about five minutes in total! And, while it is straightforward to program at the control, he makes use of the option of offline programming using a CADCAM system and transferring files to the machine via a USB stick.

“The arrival of the XYZ 2-OP has significantly improved our productivity and has sown seeds as to how I can develop our machining capability going forward. We have very little room to bring in more machining capacity at our current premises, so it is a case of possibly having to relocate. However, by concentrating on work of a certain size we could develop a multiple 2-OP working environment to grow the business.” 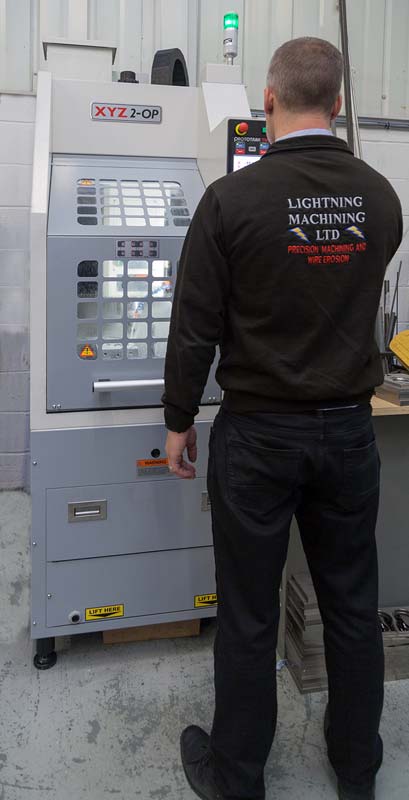 (Above) The XYZ 2-OP may be compact, but it is making a big impact on the bottom line at Lightning Machining. 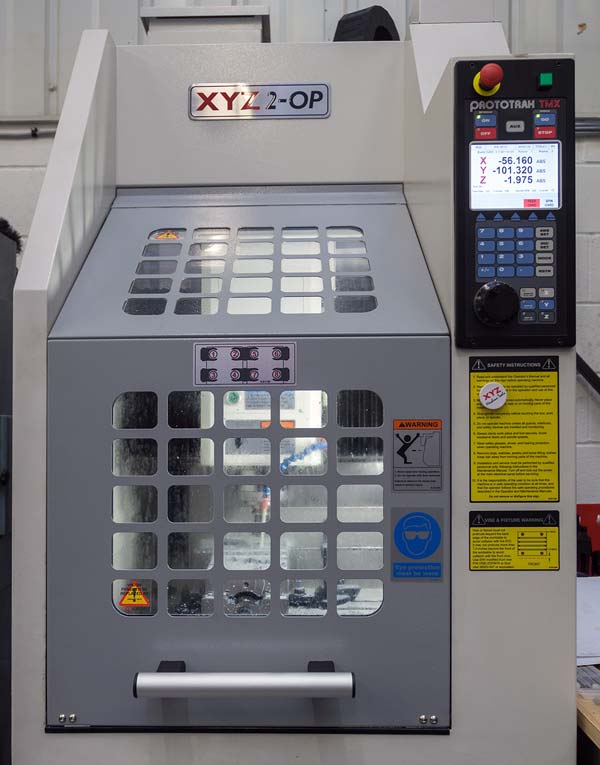 (Above) The combination of working envelope, eight position toolchanger and 6000 revs/min spindle is ideal for Lightning Machining’s work.

(Above) Space is at a premium at Lightning Machining, but the three XYZ machines complement each other to deliver a strong machining capability.