FROM PROPELLERS TO CUSTOM MOTORCYCLES

Eclectic is an often used word, but in the case of precision sub-contractor Lamb Engineering it is one that fits perfectly. Lamb Engineering’s machining is split between manufacturing variable pitch feathering propellers for the marine industry, workholding solutions for one of the UK’s leading industry names, and a wide variety of general engineering, which includes designing and making parts from scratch for custom motorcycles, a particular passion of Managing Director Larry Houghton.

At the heart of Wiltshire-based Lamb Engineering’s success is the design flair of Larry Houghton, who has won several awards for products he has created. A totally waterproof padlock he designed and manufactured was chosen as one of the Millennium Products; while his custom motorcycle creations have gained worldwide recognition. It was this creative ability that was put to work when Lamb Engineering was approached to machine components for the Darglow FeatherStream Propeller. The problems encountered manufacturing to the original design led Mr Houghton to completely rework it, with the addition of a unique external pitch adjuster that allows the pitch of the propeller to be fine-tuned in under 15 minutes. The design changes resulted in a propeller that was 25-30 per cent less expensive than comparable systems on the market.

The machining of the components also threw up its own challenges, with the blades being produced from heat treated 316 stainless, while the bodies are machined from either billet or cast AB2 aluminium bronze. For the machining of these parts Lamb Engineering relies on a range of machines from XYZ Machine Tools. Recent machine purchases have seen it take delivery of two turning centres an XYZ 250TC, which has recently been joined by an XYZ TC400. “The success of the propeller business as seen volumes grow considerably making additional turning capacity a necessity. The fact that we are comfortable with the XYZ machines and their reliability it was a simple decision to add the second turning centre to ensure that we had enough capacity to meet the demand for the propellers and other areas of our business. The accuracy of the turning centres was also paramount as we have to machine the parts to tight tolerances, for example the blade groove width is tied to plus 10 micron and the body width to minus 10 micron,” says Larry Houghton.

Both XYZ turning centres make use of the Siemens 828D Shopturn control system, with its conversational programming making setting, programming and production of the small to medium batch sizes, that are the norm at Lamb Engineering, a straightforward procedure. In a similar vein the VDI equipped turret, which has the option of driven tooling capability at any of the 12 positions, makes tool setting quick and simple, a situation helped by the inclusion of an automatic tool setting arm as standard. With a maximum swing of 600 mm, matched by a maximum turned length of 600 mm, which when combined with the solid meehanite cast base and powerful spindle (45 hp on the TC400), provide the capacity, performance and rigidity that allows the XYZ turning centres to outperform machines of much larger capacity.

Lamb Engineering has added to its stock of XYZ Machines as the business has grown moving from manual machines back in 1994 through ProtoTRAK controlled mills to full CNC, with all of the machines it has purchased still in operation today. This reliability of the XYZ machines was highlighted recently when Lamb Engineering submitted its first XYZ machining centre, purchased in 1996, to a Renishaw Ballbar test. The results showed that it was deviating very slightly from the original specification and a simple software adjustment was all that was required to bring it back to ‘as new’.

“We have been using XYZ machines for 20 years and over that time we have become reliant on them. As such it is encouraging that we have seldom had any issues with the machines, but when we have had to call on the service department issues are dealt with promptly and efficiently. The reassurance that XYZ keeps stocks of spares for every machine, even those we have that are 20 years old, gives us the confidence to continue to look to XYZ when we have any machine tool requirement. The machines we have are proof that there really is such a thing as value for money.”

While the propeller and workholding components are Lamb Engineering’s ‘bread and butter’, it is Larry Houghton’s love of custom motorcycles that have won him national and international acclaim. These works of art are a passion and are fit in between the day job for Mr Houghton designing and building motorcycles for himself and individual customers, one of which keeps his bike as a centrepiece in his living room. The current project is the manufacture of a limited edition JAP engined motorcycles. The engines are machines complete at Lamb Engineering and are limited to 10 units per year. 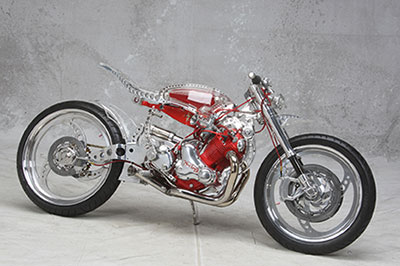 (Above) The award winning Café Rouge with its one-off billet machined frame. 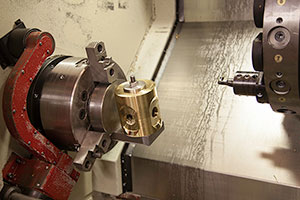 (Above) Tight tolerances are achieved on the XYZ turning centres at Lamb Engineering.

(Above) The Darglow FeatherStream Propeller, and components, were redesigned by Larry Houghton at Lamb Engineering and machined to tight tolerances using XYZ machine tools. 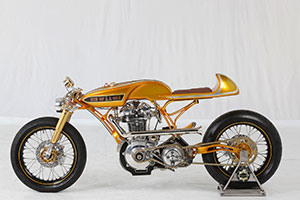 (Above) Son of a Gun took over 1400 hours to complete and took 2nd place in AMD World Championships 2011 Ð Sturgis USA. It also came first at the AMD Alexandra Palace 2011 (British championship) and the European championships in Mainz Germany, the first UK bike to do so.