In less than ten years Chirton Engineering Ltd has invested more than £2 million in new machine tools. Not bad going for a subcontract business started on a shoestring by a former machinist and works manager made redundant when his employer sold his engineering business to fund his retirement. “I was 40 at the time with a mortgage and three school age children,” recalls Paul Stewart, Chirton’s owner and Managing Director, “and I found myself wondering what I was going to do with the rest of my life.”

Re-mortgaging his house and borrowing what he could from friends and family, all of whom, incidentally, were repaid in full within 18 months, he persuaded the four best machinists from the previous company to join him in his new venture. Chirton opened its doors in September 2003 and for Paul Stewart at least it was a case of 18 hour days, no salary for the first six months, and a very fast learning curve. “I had a small office with a computer in it and a second-hand XYZ ProTURN lathe just outside the door,” he says. “When the machine stopped I stopped whatever I was doing, loaded a new bar of material, and then set it running again. The first month’s survival target was £11,000 but we actually invoiced £15,000.”

Impressed with the reliability of XYZ Machine Tools Ltd’s ProtoTRAK-equipped CNC/manual lathes and mills, and with the equally easy-to-use Siemens ShopMill and ShopTurn conversational controls fitted as standard to XYZ machining centres and turning centres, Chirton now has 15 XYZ machines and its latest order is for a 20 hp/8000 rev/min XYZ 1510 VMC vertical machining centre with optional geared head.

The North Shields-based subcontractor recently took delivery of a 45 hp/3300 rev/min maximum spindle power XYZ TC 320 LTY turning centre. Equipped with a VDI turret holding up to 12 driven tools, this machine has a 450 mm maximum swing and a turning capacity of 320 mm diameter (78 mm bar capacity) by 550 mm. A full C axis is complemented by a Y axis that can travel 50 mm above and below the centreline, making easy work of components that would otherwise require separate milling and turning operations. Canned cycles cater for common machining functions and the simple conversational programming of the Siemens 828D ShopTurn control means that the entire sequence from drawing to finished part takes the minimum of operator keystrokes.

Much of Chirton’s work is destined for offshore oil and gas applications, which means working to tight tolerances (four micron for one customer) and machining anything from oil field grade carbon steels to duplex and super duplex stainless steels and super alloys such as Inconel. And with customers in Norway, France, Germany and China – and customer product on trial in the USA – the company is now a global rather than a purely UK focused supplier of precision machined parts. Over £100,000-worth of load cell pins with a total weight of over eight tons has just been shipped to a customer in Norway, and a repeat customer in France last year received 60,000 components with a zero defects performance. It’s not all production work, however: Chirton is involved in prototype and R&D, sitting in on customers’ design meetings and actively involved in customer projects.

The 17,500 sq. ft. facility situated on the West Chirton South Industrial Estate is home to a workforce of 47 people, five of whom are apprentices, and turnover has grown from £250,000 in the first year to £4.5 million. On the cards is a move within the next two years to a factory twice the size of the current premises and the creation of 20 or more jobs. “The people here know Chirton Engineering is my life and if they buy into that passion and what is clearly a growing business they, too, will have a job for life,” says Paul Stewart. “Of the four original employees one has retired, one has emigrated to New Zealand and two are still here. So, it is very rare to lose anyone as we treat people fairly, pay very well, and if there’s anything that needs to be said, it is said openly and honestly.”

The difficulty is that engineering skills are in short supply in the North East and this situation is impacting on growth. As Paul Stewart pointed out when interviewed recently for Channel Four News, “We have expanded our premises, and we can purchase new machines for new clients and contracts, but we do need skilled people to operate them.” So, with external recruitment unlikely to satisfy the BS EN ISO 2001:2008-accredited subcontractor’s requirements, the emphasis is on more in-house engineering apprenticeships and, on a broader basis, training to help and encourage every employee to reach his or her full potential.

“There is a career path here for anyone who shows ambition and the desire to learn,” says Paul Stewart. “Our production manager and our production supervisor are both 31 and began here as machinists. We have other people who are also working their way up: one of our apprentices, for example, is now operating the biggest piece of kit we have out there on the shopfloor. Our fast track training programme has given him the skills and the confidence to do this, and he is working in a machining cell with 100 years-plus of machining experience on hand to help him succeed. Within 18 months he has become a real asset to this business, and this is why he has had six pay rises in that time.”

Despite the current skills shortage in the region, Chirton is continuing to beat month on month target figures, and was recently declared winner of the Small Business of the Year category at the 2012 North East Business Awards. This will see the company representing the North at the National Awards in London in November. Prior to this success, Chirton received the North Tyneside Apprentice Employer of the Year 2012 Award (under 50 employees), and is working with North Tyneside Council to highlight the diversity and career potential of engineering to students in local schools and colleges. 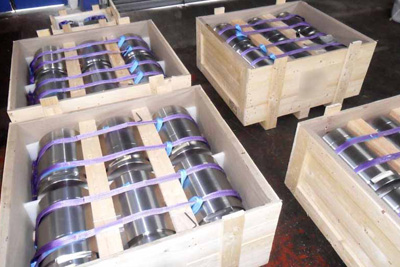 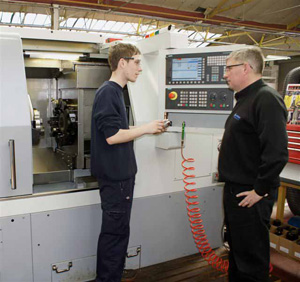 (Above) “I tell every apprentice you are not coming here to make the tea or sweep the floor. You are coming here to be an asset to this company.” Paul Stewart, Managing Director, Chirton Engineering Ltd. 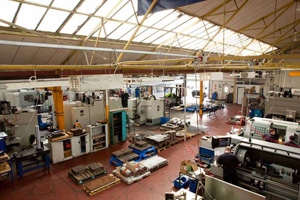 (Above) Chirton Engineering Ltd’s shopfloor, currently home to 15 XYZ machine tools, reflects the company’s commitment to its people and their working environment.